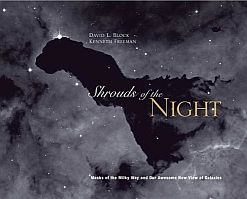 The cover of the new coffee-table book
by Professors David Block and Ken
Freeman, titled Shrouds of the Night.
(Image: David Block) 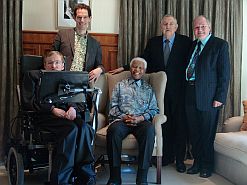 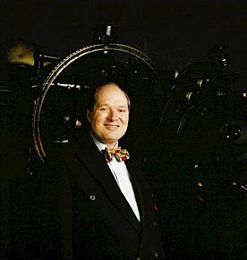 A new book published by distinguished South African astronomer David Block and his Australian colleague Ken Freeman will sweep aside the clouds of cosmic dust that have obscured our view of our galaxy and those around us.

To coincide with the International Year of Astronomy, the two academics have published a 436-page treatise titled Shrouds of the Night: Masks of the Milky Way and Our Awesome New View of Galaxies. Launched in South Africa in January 2009, the lyrically-written book is the result of an eight-year collaboration and promises to reveal fascinating new glimpses into the structure of the universe.

Because they have now discovered that the universe is much more symmetrical than was first thought, the pair has also been able to develop a new system of galaxy classification. Their system is based on symmetrical patterns rather than existing criteria such as magnitude, resolvability, brightness and roundness of galaxies.

Such a system was previously unattainable because of the obscuring effect of vast clouds of galactic dust – the shrouds of the night mentioned in the book’s title.

Block and Freeman used the technique of near-infrared photography to capture their groundbreaking starry images. With the help of an infrared camera mounted on Nasa’s Spitzer space telescope, they were able to pierce the galactic dust that for centuries had prevented astronomers from accurately seeing what the universe really looks like.

For many years astronomers believed that the dark patches between stars were devoid of matter. Now it is a known fact that these are no vacant holes, but rather are filled with cosmic dust.

These dust grains are so cold, say Block and Freeman in their book, that any chemical matter they encounter will stick to them. At temperatures of up to -253°C, grains accumulate frozen shells of water, ammonia, methane, carbon dioxide, and other molecules. Simple molecules are converted into more complex compounds under the influence of ultraviolet radiation, turning the dust grains into veritable chemical factories – albeit very tiny ones. Thus evolves the universe.

The book also delves into the mystery of the dark matter that surrounds galaxies. Freeman, an expert on the subject, wrote extensively on dark matter in his book The Hunt for Dark Matter in Galaxies. He said that most galaxies are enveloped in huge dark halos that contain up to 20 times as much mass as the luminous stars and cold gas in the galaxies themselves, but that emit no light at all.

Shrouds of the Night features background information on general photography, and highlights work from astrophotography pioneers such as Isaac Roberts, who in 1887 took the first permanent image of M31, the spiral galaxy in the Andromeda constellation, and Edward Barnard, who specialised in taking pictures of the Milky Way and also discovered Amalthea, the fifth moon of Jupiter.

Once the reader has absorbed the importance of this early work, the authors then present their new view of the cosmos, obtained using some of the most advanced ground and space-based telescopes.

One of these is the Spitzer space telescope, which was launched into space from Cape Canaveral, Florida in 2003. Spitzer is the largest infrared telescope ever launched, and with its highly sensitive instruments has peered into regions that have always been blocked to optical telescopes by dense clouds of gas and dust. Infrared light penetrates the dust to reveal what lies behind – star formations, the centres of galaxies, and newly forming planetary systems.

David Block, Director of the Anglo American Cosmic Dust Laboratory and Professor of Computational and Applied Mathematics at Wits University, is held in the highest esteem by the international astronomical fraternity.

“I wanted to pursue studies in astronomy and my father was my biggest supporter,” said Block in an interview some years ago. “Leon Block always encouraged me to question things, to look beyond the ordinary and to make up my own mind. After all, we were Jews and that was part of our tradition as well.”

Block holds a masters degree in Relativistic Astrophysics and a Ph.D. in Astronomy, and was elected a Fellow of the Royal Astronomical Society of London at the tender age of 19. Since then his career has soared and he has been a visiting astronomer at the European Southern Observatory, the Institute of Astronomy in Hawaii, and Harvard’s Centre for Astrophysics.

Block is the only South African researcher whose work has twice made the cover of Nature, the respected international journal of science. In 2006 he received Wits University’s highest research accolade, the Vice-Chancellor’s Research Award. A popular motivational speaker, he is also the resident astronomer on Talk Radio 702 and CapeTalk Radio.

American astronomer John Kormendy has this to say about Block: “David Block is to South Africa what Carl Sagan was to American astronomy – his pioneering discoveries are reshaping astronomical paradigms, and his imprint on human culture is a legacy to all South Africans as you build your future in the technological 21st century.”

Ken Freeman is Duffield Professor of Astronomy at the Australian National University in Canberra. Considered to be one of the fathers of the dark matter field of study, Freeman was a fellow of Cambridge’s Trinity College and has taught at institutions such as Leiden University, the University of Groningen and the University of Texas. He is one of Australia’s most frequently cited scientists.