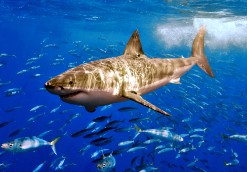 The great white shark is not the villian
that it is often made out to be, and in
fact is an endangered species.
(Image: Wikimedia)

The Kalk Bay SOS Shark Centre is raising
awareness of the need to protect sharks.
(Image: Save Our Seas Foundation)

South African researcher Alison Kock of the Save Our Seas Foundation’s Cape Town shark centre, is one of an international group of contributors to an extensive photo library of great white shark fins – one they hope will enable them to eventually track the movements of every great white and boost shark conservation efforts.

The project was initiated at the International White Shark Symposium, held in Hawaii earlier in 2010, and is coordinated by the UK’s University of Bristol.

It is based on an innovative system designed by Swiss-born marine biologist Michael Scholl, founder of the NGO White Shark Trust, which was established to conduct research into and conservation of the fearsome great white shark (Carcharodon carcharias).

The great white is listed as a vulnerable species by the International Union for the Conservation of Nature’s (IUCN) Red List.

Scholl’s research was based at Dyer Island between 1997 and 2007. This little island, a nature reserve, is one of a group of two situated about 5km off South Africa’s southern coast – the channel between them is popularly known as Shark Alley.

The trust claims that Scholl’s study was the most intensive ever undertaken of great whites. During this time he developed the system of finprinting that identifies the features on a dorsal fin, which are as unique to sharks as fingerprints are to humans.

Over 1 500 different sharks have been identified by the White Shark Trust since 1997.

“An automated software-based identification system is necessary for building an international centralised database for scientists to be able to collaborate and work together efficiently,” said Scholl, now back in his home country.

The South African team uses a submersible to capture the local sharks on camera. South Africa is home to one of the largest populations of the magnificent creatures, and the areas around Dyer Island and Seal Island, some 175km away, are said to contain more great whites than anywhere else on earth.

Ecotourism in the form of shark cage diving is very popular in this area. Gansbaai, the mainland town closest to Dyer Island, is often referred to as the cage diving capital of the world.

Kock, who has been involved with shark research for six years, said that finprinting is nothing new to scientists, but previous manual methods of identification were time-consuming. The new system will allow for more accurate population estimates in different areas, she said, as well as enhance scientific collaboration.

Other tracking techniques such as satellite tagging and acoustic pinging will still be used, as they record details that images can’t, although they are more invasive.

There is great concern among scientists over the great white’s decreasing numbers, with some researchers saying that the decline over the past 50 years is as high as 90%.

Ronald O’Dor of the Census of Marine Life said at another conference earlier in 2010 that “the estimated total population of great white sharks in the world’s oceans is actually less than the number of tigers”. The number of wild tigers is estimated at around 3 500.

German-born Dr Tilo Burghardt, of Bristol University’s computer science department, is working on the new database system. Burghardt, a specialist in computer vision and machine learning, is helping to develop the technology that will automatically recognise the characteristics on different sharks’ dorsal fins.

“The system will use ‘computer vision’ technology, and will also be able to archive the animal’s information along with their IDs,” he said. “We hope it will be usable within two years, with members of the public able to participate.”

Anyone with a digital camera and a nearby great white can contribute to the project – images may be sent to the Save Our Seas Foundation.

“I have lived in South Africa for some years,” said Scholl, “and there are great numbers of tourists going out on expeditions to see these sharks. At a recreational and educational level, imagine how satisfying it would be to take a picture of the sharks you see on your trip and then go home to find out about that individual shark and where else it has been spotted.”

The information will help shark conservation groups monitor the animals’ behaviour and migratory patterns, providing more insight in how to protect them. Another advantage is that this system is not disruptive to the animals, and it will prevent the same shark from being counted twice, possibly resulting in an erroneous population estimate.

Burghardt and his Bristol team, working with researchers from Cape Town University, previously developed innovative penguin recognition software that captures the individual marks on a penguin’s chest. Research was carried out on the threatened African penguin (Spheniscus demersus) population on Robben Island in Table Bay, and the success rate in identification was found to be almost 97%.

However, with recognisable marks captured on only 13% of penguins examined, there is still some way to go in refining the technology.

The new technology, which at the moment is only used on white sharks, is based on the penguin project.

According to the IUCN, few scientific facts are known about the great white’s biology or population status and trends – as much of the media and film publicity is misleading. Ever since the late Peter Benchley’s Jaws novel hit the shelves in 1974, the public perception of great white sharks has been disproportionate to the reality.

Great whites are not the demons they are often made out to be. The species is under threat from fishing for fins, game fishing, catching for aquarium specimens, protective beach nets, habitat degradation, and depletion of food sources.

The IUCN also mentions the danger of campaigns to kill the animals, often fanned by the media, after a biting attack. It is said that around 100-million sharks, of all species, are destroyed annually, which equates to 200 sharks every minute.

Benchley later renounced his sensationalist views on sharks, and even took to promoting their conservation in books such as Shark Trouble (2001), which focused on the danger that media hype posed to the protection and understanding of marine ecosystems.

“I know now that the mythic monster I created was largely fiction. I also know now, however, that the genuine animal is just as – if not even more – fascinating,” wrote the author, who dived with sharks in South African waters on several occasions, in Shark Trouble.

Benchley also explained his reformed view in a 2002 interview with National Geographic. However, by then the damage had been done.

South Africa is one of several nations which have committed to protecting the great white, and in 1991 was the first nation to do so. Great whites may not be killed nor harmed in South African waters, and the sale of shark meat, fins, or any other product is forbidden.

Namibia (1993), the US (1997), Australia (1998), Malta (2000) and New Zealand (2007) also protect the great white. Sharks need to be protected because they play an important role in maintaining the balance of the ecosystem. They hold the numbers of smaller predators in check, and keep populations healthy by eating sick marine animals. 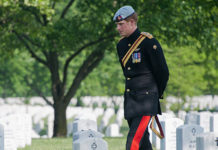