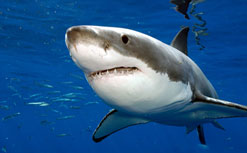 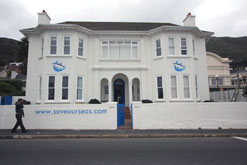 The SOS Foundation – Save Our Seas – has opened a new shark research and education centre in Kalk Bay, south of Cape Town on the Cape peninsula, one of the world’s prime Great White shark zones. The Save Our Seas Shark Centre (SOSSC) aims to educate the public about the environmental importance of sharks, and to dispel the inaccurate notion that they are nothing but vicious killing machines that will attack unprovoked.

This is far from the truth, says the SOS Foundation. Sharks are vulnerable and in trouble ecologically – with more than 100 million sharks disappearing from our water every year their numbers are dwindling rapidly. The world’s shark population has declined by 90% since the 1950s and 110 shark species are now listed as threatened with extinction on the International Union for Conservation of Nature’s (IUCN) Red List of Threatened Species.

South Africa is now stepping in to help save the sharks. Lesley Rochat, who has worked on the SOS Foundation’s M-Sea programme, is the manager of the SOSSC. “We will use the very channels and methods employed by the media to brand sharks as nature’s outcasts to turn the tables,” she said.

The M-Sea programme is an initiative in which ragged tooth sharks are tagged with ultrasonic and satellite tracking devices, and released. Partners in the programme are the AfriOceans Conservation Alliance, the SOS Foundation, and the Two Oceans Aquarium in Cape Town. This is part of the aquarium’s ongoing work to learn more about the species. The ambassador for M-Sea, the ragged tooth shark Maxine, was tagged and released back into the ocean in 2004 after her capture in shark nets in 1995.

AfriOceans maintains that sharks are considered good bio-indicators of the health of the ocean, yet despite this important role they are not a conservation priority. Sharks play a vital role in maintaining the delicate balance of marine ecosystems by taking out weak and diseased fish. They help to help control populations of other predators, and if they are eliminated from the food chain the other predators will increase, which will in turn cause the reduction of other important species of fish further down the food chain – species that humans depend on for food.

According to SOS Foundation executive director Chris Clarke, the SOSCC aims to play a central role in shark conservation in southern Africa, and by throwing open its doors to the public will be an ever-present reminder of the importance of sharks in the ecosystem. “Increased global awareness of the need to protect our ocean’s limited resources, in particular sharks, lies at the heart of all SOSSC goals,” he said, adding that there is a real need for the shark centre so that people can learn more about marine conservation and the myths about sharks.

The SOSCC’s planned activities include scientific research projects, and awareness and education projects for the public at large, with a special emphasis on children. It will also embark on scientific collaboration between experts from research institutions, governments and the industry.

The non-profit SOS Foundation is based in Geneva, Switzerland, and was established in 2000 to increase public awareness of the marine environment, our greatest shared natural resource, and to promote its preservation and conservation. The founding member of the SOS Foundation remains anonymous to this day and is referred to in all literature simply as The Founder.

The organisation has operations all around the world, with a diverse range of projects on the go in more than 30 countries. It has conducted operations in South Africa for over five years, and its projects include research on great white sharks in False Bay, and on tiger sharks in KwaZulu-Natal. It is also a partner in the M-Sea ragged tooth shark-tagging programme.

One of the first SOS grant recipients was the SharkWorld exhibition that opened at Iziko Museums in Cape Town in October 2004 and is still open. The exhibition was developed under the guidance of world-renowned ichthyologist and shark specialist Dr Leonard Campagno, head of the museum’s Shark Research Centre. Campagno is also the chief scientist at the new Shark Centre.

Iziko’s Shark Research Centre is one of only a handful of organisations worldwide that focus on the class Chondrichthyes – that is, cartilaginous fishes (sharks and rays) or shark-like fishes. Besides fundamental research projects into evolution, behavioural ecology and conservation of these animals, the centre informs and educates the public as well as serving as an advisory body to commercial fisheries and international research bodies.

South Africa’s Natal Sharks Board is the only organisation of its kind in the world, according to the board. With more than 40 years of experience in the prevention of shark attacks and research on sharks, the board acts as an international consulting body that supports and promotes the conservation of sharks.

Helping to save our sharks

Sharks are hunted extensively for their fins. Shark fins are among the most expensive foods in the world, surpassed only by such delicacies as truffles (the real ones) and some caviars. Even in South Africa sharks are killed for this reason, although illegally by poachers, as the practice is prohibited in this country. The Great White shark is protected by law in South Africa and the country pioneered an international convention to protect Great Whites from attack by humans.

While it is said that almost 80% of Chinese people are unaware that shark-fin soup is made from shark fins and don’t realise the danger to the animals, the slaughter continues. According to the Shark Savers organisation, sharks are being driven to the brink of extinction because of the increased demand for shark-fin soup, which in China is a sign of prosperity especially among the growing middle class.

Shark meat in this region is now many times more expensive than other types of fish. A bowl of shark-fin soup costs around $100 while dried shark fins cost anywhere from $100 to $300 per pound, says Shark Savers. The organisation says that a single Whale shark pectoral fin can sell for up to $15 000. The Whale shark is the largest fish in our waters and is not a predator but relies mainly on plankton for its nutrition. It is found all over the world.

The coasts of South Africa are home to great shark populations, and they are one of the country’s most popular tourist attractions. Shark tourism is on the rise and many cage diving operations have sprung up along the coasts, catering to those who seek the excitement of being among the creatures in their own habitat.

South African waters are home to several species that have been known to attack humans, which only adds to the thrill. Among these are the Zambezi, Great White and Tiger sharks. However, says Chris Clarke, the threat of shark attacks on humans is highly exaggerated. “Last year, only one person was killed by a shark in the whole world. They might bite a human, but usually when they realise it’s not a seal they let go.”