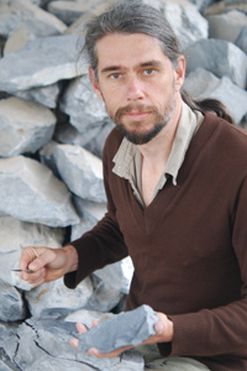 Dr Robert Gess with the fossil discovered near Grahamstown in the Eastern Cape.

Dr Gess describes his discovery as a truly exciting addition to the record of earth’s history.
(Images: Wits University)

The recent ground-breaking discovery of a fossilised scorpion near Grahamstown in the Eastern Cape provides evidence for the oldest known land living animal in Southern Africa.

Discovered by Dr Robert Gess from the Evolutionary Studies Institute at the University of the Witwatersrand, this unique 360 million year old specimen was recently named Gondwanascorpio emzantsiensis.

Dr Gess said the fossil was the only known land animal from Gondwana, a former supercontinent comprising Africa, South America, Australia, India and Antartica. “At that time South Africa was quite close to the South Pole, whereas all other important fossil sites of this age were deposited around landmasses that were situated near the tropics during the Devonian,” explained Gess. The Devonian is a geological period dating back around 400 million years.

Dr Gess described the finding as a truly exciting addition to the record of earth’s history that would build the reputation of country as an exceptional paleontological hub. “For the first time we know that not only scorpions, but whatever they were preying on, were already present in the Devonian period.”

He added: “This finding is the first page in the history of land living animals in Southern Africa. My research is taking the story deep into time when the first true trees began to spread, creating diverse niches for invertebrates and ultimately terrestrial vertebrates.”

Dr Gess discovered the scorpion buried in rocks at Waterloo Farm near Grahamstown after spending a several every week splitting shale with a pen knife and a small masonary chisel.

“I chipped off the mudstone covering a pincer. I immediately recognised that it was a scorpion pincer. It was a great moment,” he said. He said he could probably have mistaken it for a plant fragment had he not spent much time researching the area, going back almost twenty years.

Dr Gess believes that the fossilised scorpion might have fallen or was washed into an estuarine lagoon and rapidly buried in extremely fine grained oxygen- depleted mud that could have prevented its decay.

The weathering of the landscape brought the rock layers close to surface, where they were unexpectedly exposed by road works in 1985. It was the first time rocks were exposed to the light after 360 million years.

“The estuarine muds were in turn covered with sand and eventually buried deep in the earth’s crust where they were transformed into rock still bearing the imprint of scorpion bits,” he said.

Earliest life moved on to land

According to Dr Gess, the movement of life onto land began during the Silurian Period, more than 420 million years ago. The first wave of life that moved from water onto the land consisted of plants which gradually increased in size and complexity throughout the Devonian Period.

This initial colonisation of land was closely followed by plant and debris-eating invertebrate animals such as primitive insects and millipedes.

By the end of the Silurian period about 416 million years ago, predatory invertebrates such as scorpions and spiders were feeding on the earlier colonists of land.

During the Carboniferous period around 360 million years ago, early vertebrates – four-legged creatures – in turn left the water and started feeding on the invertebrates.

“For the first time we know for certain that not just scorpions, but whatever they were preying on, were already present in Gondwana in the Devonian,” said Dr Gess.

By the end the Devonian period, Gondwana had a complex terrestrial ecosystem, comprising invertebrates and plants which had all the elements to sustain terrestrial vertebrate life that emerged around this time or slightly later, he said.

In 1999 and 2008, Dr Gess worked closely with the SA National Roads Authority to rescue large samples of rock that were going to be destroyed to upgrade the road. “I have been painstakingly working through them since then. The sample is a scientific treasure trove that keeps me going.”