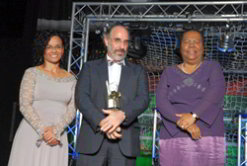 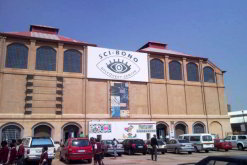 The bustling Sci-Bono Discovery Centre
in Newtown, Johannesburg, has helped
children to find their passion for science.
(Image: Sci-Bono)

A bit of enthusiasm, mixed with passion and a dash of perseverance – these are the attributes that have earned David Kramer, the CEO of Johannesburg’s Sci-Bono Discovery Centre, his knighthood from the French government.

Kramer became a Knight of the French National Order of Merit at a ceremony held at the French Embassy in Pretoria on 21 July, because of his contribution to maths and science education in South Africa as well as France. The award is given to French nationals and foreigners for distinguished military and civil service.

Kramer, who is not to be confused with the popular local musician of the same name, has been instrumental in establishing and increasing communication between French and South African science centres, a feat for which he was awarded the blue, six-armed Maltese Cross.

However, his contribution extends further than the mere opening of portals between two countries. As the CEO of Sci-Bono, he has stirred pupils’ enthusiasm for science, which is an accomplishment on its own.

Sci-Bono, the largest facility of its kind in Africa, breaks away from the conventional museum model whereby visitors are merely onlookers. The emphasis is on interactivity, and tentre provides many tangible exhibits.

Passion for science and technology

It is evident by the way Kramer speaks, with clear-cut confidence and buoyancy, that he has a great zest for science and technology.

The former economist’s foray into education began when he taught at a Sowetan night school.

After a stint overseas, he returned to South Africa in 1984 and took up a post at Protec (Programme for Technological Careers), an NGO that encourages black youngsters to take up careers in science and technology, and helps them assimilate their education into the working world.

It was here that Kramer became intrigued by the disciplines of maths and science, and it was with this newfound fascination that he ran Protec for 20 years.

Now at the helm of Sci-Bono (“bono” is Tshivenda, meaning “vision”), Kramer’s task is to awaken that nthusiasm for science and technology in pupils, and take their knowledge from the centre to the classroom.

He stresses the importance of maths and science for schoolchildren, saying that no matter what you may study in the future, the two subjects are crucial.

“The scary thing is if you study art or religion, you will still compete with students who would have taken maths and science at school.”

He speaks of how, 60 years ago, learning to read and write were essential for surviving in the working world, but added that today, those skills are not enough.

“If you are unable to use screen-based technology you are considered illiterate. It is critical for kids to learn to think in a technological environment.”

Kramer believes the way the two subjects are taught in schools make it difficult for pupils to grasp them. He added that many teachers are not comfortable with maths and science and have not been trained sufficiently to teach them.

“In the 1980s, students would first come across calculus in university. Now, pupils in grade 12 are starting to learn it, but their teachers are not equipped to teach them.”

He also notes that the perception of maths and science as difficult subjects may be a deterrent for some pupils.

While he admitts the subjects may be challenging, they are no more demanding than maths and science in other countries. The problem, Kramer says, is not with the aptitude of South African learners but with the way the education curriculum is structured.

“We in South Africa are not getting the basics right. We have not yet got grades one, two and three right.”

Changing attitudes towards science and maths

In a 2008 interview, Kramer said that his and the centre’s purpose was to change pupils’ and teachers’ attitudes towards maths and science.

“We still have a long way because everyone has their own attitude,” he said at the time.

Another one of his aims was to educate children about the opportunities maths and science can offer them in the future.

According to Kramer, Sci-Bono has been making headway, and creating a good impression on the children who enter the centre.

“We get 180 000 kids coming through Sci-Bono and they leave excited. But then they return to the schools that teach them in the old boring way. Maintaining that excitement is hard.”

To boost pupils’ enthusiasm, Sci-Bono runs a number of hands-on courses that prompts the children to design, build and experiment in teams.

Two of the more intense courses include rocket and robot construction. With the former, children are taught by professional rocket scientists to design and build a rocket in five days.

“It is not a trivial exercise. These are real rockets,” says Kramer. “The course culminates in them watching their own rockets shooting up into the sky.”

“This goes on for two months and there’s a lot of sweat that goes into it. It is harder than anything kids do at school, yet they get stuck in and enjoy themselves. It becomes a life changing activity,” says Kramer.

However, he laments the fact that Sci-Bono is serving the needs of hundreds of children instead of hundreds of thousands. “We need to have a nationwide impact,” he says.

Kramer does maintain that learning is not always about excitement. He says that youngsters should learn from an early age that the higher they go, the harder learning becomes. More important, he says, is that children need to have a vision and know what they want out of learning.

He feels the education system has seriously failed pupils in this regard, citing the fact that career education is not taken seriously.

However, Kramer has not completely given up on career education. Mining conglomerate BHP Billiton partnered with Sci-Bono in 2004 to kick start a career centre worth R13.5-million within the science centre.

It is a public service that offers career advice, counselling and career education activities to both teachers and pupils.

Kramer is currently busy on a number of projects with the Gauteng provincial government that involves improving the state of schools and teaching.

However, he is unable to disclose the details of the projects.

“I would like to see an increase in the number of teachers who have a passion for maths and science. I also want to see children take advantage of the opportunities that are afforded to them,” he says.