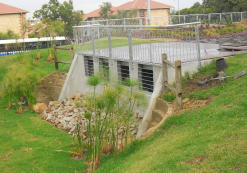 The rainwater is collected and stored in an underground dam on the Vodacom premises.
(Image: Vodacom) Thembani Jwambi of Vodacom hopes that other companies will follow Vodacom’s example in stepping up efforts to save water. 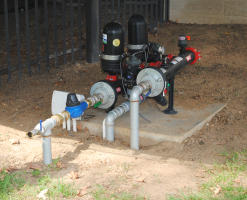 Water is pumped from the storage dam to the cooling plant, and any excess is used to irrigate the gardens.
(Images: Janine Erasmus)

Sustainability was the name of the game at the launch of South Africa’s largest commercial rainwater harvesting project, located at the Midrand head office of mobile provider Vodacom.

The R4.2-million (US$459 000) project is expected to reduce Vodacom’s usage of municipal water for cooling by up to 40%. Fittingly, it’s been completed in the UN-declared International Year of Water Co-operation. Over the last 10 years, says UN Water, global water use has been growing at double the population growth rate, and is unsustainable.

“Corporates, even those that don’t use a lot of water, can make a significant on society and the environment by introducing conservation measures,” says Maya Makanjee, the company’s CO of corporate affairs. She also sits on the board of the World Wide Fund for Nature, South Africa.

Decisions taken today will affect future generations more, says Makanjee, because water is available now whereas people in years to come may face greater challenges in accessing the resource. Rainwater harvesting is a technique that has been proven effective in conserving water.

Thembani Jwambi, Vodacom’s executive head of facilities, says there were a number of compelling reasons for initiating the project. Firstly, the company wanted to reduce its reliance on municipal water and reduce the volume of municipal water it uses in the HVAC cooling plant in its Commercial Park building.

Also, rainwater would require fewer chemicals for treatment, which in turn would help the environment, and lastly, it would contribute positively to the bottom line.

The company started on its water-saving drive by filling in the manmade water features and pools on its premises, replacing them with water-wise gardens. In addition, waste water from the cooling plant was used for irrigation. The savings from these efforts amounted to about 15%, but Vodacom wanted to do more.

Tackling the water usage of the cooling plant, the team felt, was a way to substantially reduce overall water consumption. The plant uses about 30 megalitres of water every year, but now 12 of those megalitres – or 40% of the demand – are supplied entirely from rainwater. One megalitre is a million litres.

Based on 50-year data reflecting annual rainfall in the area, which was calculated at 537mm per year, the company was able to determine the optimal size for an underground dam to collect the monthly downpour.

“The capacity of the dam is one megalitre, which is what we are able to harvest every month,” says Jwambi, “and the catchment area is 0.4 square kilometres.”

Those million litres a month, which would normally run away into the stormwater drain, are now diverted to Vodacom’s Commercial Park.

The water is not exposed to any chemicals, and the only treatment is a filtration process. Monitoring of quality and quantity is automated, and because there is a non-return valve in place, there is no danger of the untreated rainwater and municipal water coming into contact.

Excess water will be used to irrigate the gardens.

Vodacom aims to become known as a leader in the field of corporate water conservation. “We want to tell other companies that we did it, and they can do it too,” says Jwambi.

“Every drop counts. All of us in South Africa need to realise that water conservation doesn’t depend only on the government,” says Phakamisa Mgedezi, programme manager for rainwater harvesting at the Department of Water Affairs. “Rainwater harvesting is not a new idea because people in rural areas have practised it for years, but these days it’s well suited to urban areas because there are better structures in place.”

By 2030, an extra 52% of water will be in demand from urban centres, agriculture and industry around the world. Unless steps are taken now to cut down on water usage, the demand will outstrip the supply by 17%, predicts the 2030 Water Resources Group.

South Africa’s special challenge, says the group in a report titled Charting our Water Future, lies in the fact that demand is projected at 17.7-million megalitres by 2030, with 34% of this demand coming from households. However, the country currently supplies 15-million megalitres, and not all of that can be guaranteed for the future.

“At WWF we are faced by challenges such as preserving wetlands. This issue and others that centre on water availability and scarcity are crucial for the African continent. Today water is available, but we need to look to the future,” says Makanjee.

Wetlands are important because they help to purify and store water, thus ensuring a supply during times of drought. They help to minimise flood damage because they regulate water flow, and they control soil erosion. They also provide a home for a wide range of plants and animals, and they are an important source of food and drinking and irrigation water for poor communities. Yet, 50% of South Africa’s precious wetlands have been lost, says Makanjee, and others are suffering under pollution from industrial effluent.

“Water availability affects not only society,” she says, “but the economy too, because many companies rely on water for the operations. Vodacom has taken on the responsibility for reducing its water footprint.”