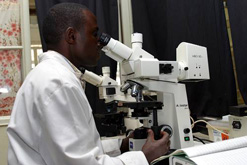 Standard sputum tests for drug-resistant
tuberculosis can take months to come
back from the laboratory.
(Image: World Lung Foundation)

In April 2009 the South African government will start rolling out a new test to diagnose multidrug-resistant tuberculosis (MDR-TB), of which 16,000 cases were reported in 2007 alone. Doctors are hoping that the new rapid tests will get more patients on treatment and faster.

The new test, called a line probe assay (LiPA), will allow diagnosis of drug-resistant TB in as little as one day, whereas standard sputum tests can take anywhere from weeks to months to come back from the laboratory.

A new report on global TB control, released on Tuesday 24 March by the World Health Organisation (WHO), again put South Africa fourth in the world for the annual number of MDR cases reported. However, the country has boasted above-target case detection rates since 2003 – although there are still high rates of treatment default and patient death.

Currently, the molecular test was only available via referral to a handful of laboratories and most of the major MDR centres, said Gerrit Coetzee, head of the TB referral laboratory at South Africa’s National Health Laboratory Service (NHLS).

Linda Erasmus, deputy head of the NHLS TB referral centre, said the government would begin rolling out the test to labs across the country, starting in Northern Cape.

Many doctors expect the increased availability and sensitivity of the rapid test to improve MDR-TB patient outcomes, because faster test results would allow doctors to place more patients on appropriate treatment sooner, and reduce the risk of infecting others.

“It is going to make huge difference, depending on how it’s used. It could mean we’d be able to identify patients with MDR immediately after their smear-positive results,” said Dr Gilles van Cutsem, coordinator of a TB and HIV project run by Médecins Sans Frontières (MSF) in Cape Town.

“We’ve used it in Khayelitsha [township near the city] and it has allowed us to put patients on treatment one to two months earlier.” Van Cutsem said the sensitivity of LiPA might also detect MDR cases that had escaped current tests.

Drug-resistant TB shot onto the public health agenda in 2006, when 53 people died of extensively drug-resistant TB just over two weeks after they had been diagnosed with the disease at a small hospital in the town of Tugela Ferry in KwaZulu-Natal.

The how and the how much

The line probe assay detects the presence of strains of mycobacterium tuberculosis indirectly by amplifying DNA present in sputum with a polymerase chain reaction.

The treated material is then visualised on a membrane strip by a colour reaction rather like a pregnancy test, with bands corresponding to different TB strains. LiPAs also detect resistance to rifampicin (a first-line drug used to treat TB), which often indicates multidrug-resistant TB.

Prices negotiated between the manufacturers and the Foundation for Innovative New Diagnostics, a Swiss NGO, mean that LiPAs will be at least US$30 (R280) cheaper than conventional tests, said Dr Marti van der Walt, interim director of the Medical Research Council’s Epidemiology and Intervention Research Unit.

Most costs associated with rolling out the tests are likely to be once-off in the form of upgrades to laboratory infrastructure and equipment.

Erasmus of the NHLS said implementing the new test would not be easy, and the technical skills of some laboratory staff would also have to be upgraded. Access to the test is still likely to evade almost 50% of those living with HIV.

The sputum tests most commonly used to detect TB often fail to recognise the disease in HIV-infected patients, so a LiPA would have to be carried out on a culture, in which samples are cultivated in a special liquid and the test can take at least two weeks.

Erasmus noted that 99% of South Africa’s laboratories did not have adequate infrastructure to conduct the test, which could make it difficult to implement in rural areas and was one of the reasons that doctors still needed more ways to test for TB and its drug-resistant strains.

“With the test, you need to be absolutely certain there is no other contamination from other DNA … and the test is very prone to contamination, so you have to have a setting you can control,” said MSF’s Dr Gilles van Cutsem.

“This test is good but it’s going to be very difficult to roll out in rural areas and in poorer countries,” he said. “We still need tests that are simpler and can be used at the primary care level.”