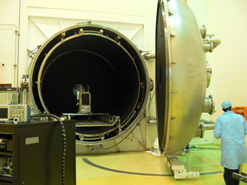 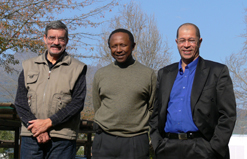 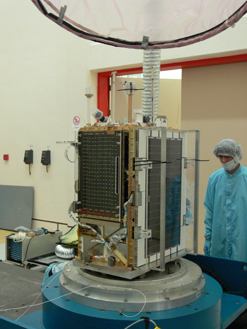 At the rate technology develops, the impossible becomes possible, the improbable happens daily, and things which were once the province of the technical elite become commonplace.

Take satellites, for example. The Russians launched Sputnik, the first satellite, into earth orbit only 50 years ago, but now there are more than 25 000 satellites estimated to be circling the globe – some 16 000 of them inoperative space junk.

And – here is the surprising part – not all of those were built by big government programmes with multibillion-dollar budgets. Three of those little specks of matter up there were made in a small laboratory outside Cape Town.

It all started in 1992 when Garth Milne, Jan du Plessis, Sias Mostert and the late Arnold Schoonwinkel of Stellenbosch University’s Department of Electrical and Electronic Engineering initiated a postgraduate programme to build a satellite.

Using a modular construction designed by Surrey Satellite Systems Technology (SSTL) and spending the modest sum of about R11-million (US$1.4-million) over seven years, the student group produced their first satellite in 1999. It was called Sunsat – a contraction of Stellenbosch University satellite.

Whereas most satellites are usually manufactured from specially designed and built components by companies well entrenched in the space programme, SSTL set out to prove that it was possible to build a satellite from commercially available off-the-shelf components. And Stellenbosch piggybacked on their findings.

As with many great endeavours, the first thing most people ask is “Why?” In the case of Sunsat, the answer is not the usual “Because we can,” but the more accurate “To prove we can” – and to prove it without access to the specialised technology that is the preserve of the space programme elites. An equally important aim was to train students in satellite technology, because there’s no better way to learn than to do.

Building it was the main objective, but it would always have had a cloud hanging over it (instead of the other way round) if it never got to fly. So the Sunsat group were delighted to get a payload from Nasa – flying a magnetometer and GPS testing programme. With the help of the Hermanus Magnetic Observatory about an hour east of Cape Town, the Sunsat team designed a magnetometer that could fit inside the tiny 600mm by 600mm by 900mm satellite.

On 23 February 1999 the 64kg satellite was loaded aboard an American-designed Delta 7926 rocket launcher at Van den Bergh Air Force Base in the US, and blasted into a low level sun-synchronous orbit.

Nasa worked out that they needed six months to collect sufficient data for their purposes, and estimated that Sunsat would keep going for about 11 months, so they figured they were safe. But they got more than they bargained for. Sunsat just missed being functional for its second birthday, being bashed out of its orbit by a rogue bit of rocket booster on 22 January 2000.

Nasa got a bargain. And so did Sunsat, as launching satellites is not exactly cheap, at about $25 000 (R205 100) per kilogram. Luckily, Nasa picked up the tab on this one.

So Sunsat was an unmitigated success. It flew, it did its job, and it lasted more than twice as long as predicted. More importantly, it contributed immensely to the development of high-tech expertise, its main purpose.

But a good thing tends to generate an energy all of its own. After Sunsat’s successful launch, the team was approached in 2000 by a party who, for business and strategic reasons, remains nameless. The client was looking for a platform for “earth imaging remote sensing equipment” –  satellite imagery, in English.

This created a conflict, as the team was part of the university, set up to do research and teaching – not to fulfil commercial contracts for foreign customers. So they started a company called SunSpace, and moved off campus to Techno Park, a few kilometres down the road. This satellite was much bigger than Sunsat, weighing in at about 200kg.

Construction was started in late 2000, and it was delivered in March 2003, but only launched in May 2007. It is still floating about up there, taking photographs of the earth. Even before this satellite was delivered, the client ordered another higher-spec one, which is already under construction. When completed, this will be the fourth satellite built by the group that is now SunSpace.

If you’ve been counting, you’ll notice there is a gap. The third satellite, which is called Sumbandila, was built for the South African government. The name is a Venda word that means “clear the way” or “pathfinder.”

Ordered in December 2005, the completed satellite was delivered in December 2006, taking only 12 months to build. It was to be launched from a Russian submarine in the Bering Sea in late December 2006 or early January 2007. But that didn’t happen, and Sumbandila remains sadly earthbound – a depressing state of affairs for an ambitious satellite. And ambitious this project is. It was designed to carry a payload of sophisticated remote sensing equipment that would be dedicated to imaging southern Africa.

There’s an interesting aside to this technology. Communications satellites are in a geostationary orbit, with thrusters constantly keeping them in the same position above the earth. Earth orbit satellites like Sunsat and Sumbandila, on the other hand, actually orbit the earth, with the force of gravity maintaining their positions. They only need to use their thrusters (if they have any) to make small adjustments.

These orbits are determined by the job the satellites have to do. Sumbandila is intended to take satellite images of southern Africa. When it is finally launched, it will be put into an orbit that takes it over that part of the world at a convenient 10am, about the best time for high-level imaging.

So of the three satellites SunSpace has so far built, one is still on earth, waiting for its chance to shine, one is busy sending earth images to its anonymous owner, and one is still up there, but not operational. It’s what some people might call space debris but let’s rather think of it as a permanent orbiting monument to African ingenuity and technological progress.

In the words of Ron Olivier, business manager of SunSpace, “I look forward to the day an African astronaut is launched on board an African spacecraft launched on an African rocket from the African continent.’ Big dreams, but 20 years ago, who would have thought there’d be a South African-designed satellite orbiting above our heads?