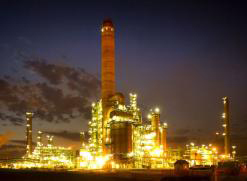 A Sasol Oil plant. The petrochemicals giant
has pioneered the technology to produce oil,
petrol and other chemicals from coal.
(Image: Sasol, MediaClubSouthAfrica.com.
For more free photos, visit the image
library.)

Sasol, South Africa’s multinational fuel and chemicals giant, has opened a R70-million (US$8.9-million) Fuels Application Centre in Cape Town, in the company’s biggest intervention to test the impact of its fuels on vehicle performance and greenhouse-gas emissions.

Opened on Friday, the centre is one of a handful of such test facilities in the world, and the first of its kind in southern Africa. It is an extension of the existing fuels research facility situated at the Sasol R&D facility in Sasolburg and adds to the work done at the Sasol Advanced Fuels Laboratory at the University of Cape Town.

Established in 1950 as a state-owned enterprise, Sasol invented and perfected the technology for making petrol and diesel from coal. Its main plant in the province of Mpumalanga – the only commercial coal-to-liquid plant in the world – produces about 150 000 barrels of synthetic fuel a day and meets about 28% of South Africa’s annual fuel needs.

The new Cape Town facility will use some of the most advanced engine-testing and emissions-measurement technologies, helping Africa compete with the world’s best fuels research facilities.

But unlike similar international test centres where the focus is on routine engine production verification, certification and component development, the new facility aims to improve understanding of vehicle emissions and their impact on the environment.

“This facility has six engine test cells that are used for research and testing,” Willem Louw, Sasol Technology managing director, said in a statement. “Inside each cell is a specific engine that is coupled to a dynamometer – an electrically controlled brake to simulate vehicle operating conditions – so that the engine can be run under the entire scope of operating conditions that it would in its normal application.”

The facility will look at both the performance of fuel in the engine and the gasses and particulate matter emitted from the exhaust pipe. Three of the six cells have the ability to analyse these gases accurately, making it possible to determine the effects of various fuel formulations on exhaust emissions in an effort to help minimise greenhouse gas emissions.

Speaking at the launch, Sasol chief executive Pat Davies said the centre will showcase local innovation. “This centre will facilitate state-of-the-art fuels research and development while showcasing the best of our home-grown technology, from the African continent, to the rest of the world.”

Sasol has embarked on a programme to research and find the best mix of solutions to reduce the company’s carbon footprint. This includes renewable energy projects such as solar, wind, biomass and algae power, and work on carbon capture and storage.

“We are serious about reducing greenhouse gas emissions that result from the use of our products,” Louw said. “We want to help reduce emissions in ways that result in least cost to society and our economy.”