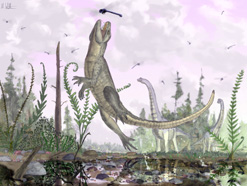 The newly discovered mammal-like
crocodile species Pakasuchus was a small
animal whose head would fit in the palm of
a hand. Unlike true crocodiles, it was
probably a land-dwelling creature that
lived on insects and other small animals.
(Image: Mark Witton, University of Portsmouth)
• Download high-resolution image 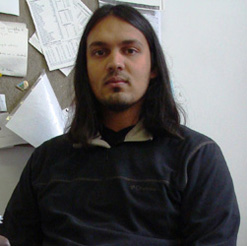 South African scientist Zubair Jinnah‘s discovery of 100-million-year-old fossils of a rare and tiny mammal-like crocodile in Tanzania has been described in the prestigious international science journal Nature.

The fossils were discovered in the Rukwa Rift Basin of Tanzania, and the unusual creature is changing the picture of animal life at 100 million years ago in sub-Saharan Africa.

“The specimen which has an articulated skull, vertebrae and limb elements, whereas previously discovered material found by our research team of the same species in previous years was of isolated or incomplete elements,” says Jinnah.

A sedimentologist and an associate lecturer in the School of Geosciences at the University of the Witwatersrand in Johannesburg, Jinnah’s research focuses on fossil-bearing sedimentary rocks. “I also described the geology of the site where the most complete fossil came from in order to understand how it was preserved and why it was so complete,” he says. “This specimen will now form the holotype (reference material) of the new species.”

The study describes the species as a small animal whose head would fit in the palm of a hand. It was not as heavily armoured as other crocodiles, except along the tail, and the structure of its limbs suggests that it was quite mobile. Unlike true crocodiles, it was probably a land-dwelling creature that lived on insects and other small animals. The species has been named Pakasuchus, or “cat-crocodile”: paka is the Kiswahili word for cat, and souchos Greek for crocodile.

Jinnah describes the discovery: “On the day of the fossil find, we were prospecting a new area where we had never been before. Every time you look at a previously unprospected area in a fossil-bearing rock unit, there is a small chance of finding something exciting and that is what happened that day.

“At the time of the discovery, three or four small vertebrae, each one about a centimetre across, were sticking out of a cliff-face. At that stage, we had no idea how much more was embedded until we did the excavation a few days later.”

Lead author of the study, Patrick O’Connor, associate professor of anatomy at the Ohio University College of Osteopathic Medicine, explains the importance of the discovery: “If you only looked at the teeth, you would not think this was a crocodile. You would wonder at whether it is a strange mammal or mammal-like reptile.”

The new species is not a close relative of modern crocodilians, but is a member of a successful side branch of the “crocodyliform” lineage that lived during the Mesozoic Era.

The international research team have now recovered portions of seven different individuals of the species in southwestern Tanzania. The tooth row with molar-like teeth initially puzzled many experts. Ancient and living crocodiles alike tend to have simple, conical teeth used to seize and tear prey, and they swallow flesh in large chunks.

But the molar teeth of the new species had shearing edges for processing food, similar to the teeth of carnivore mammals. Pakasuchus lived alongside large, plant-eating sauropod and predatory theropod dinosaurs, other types of crocodiles, turtles and various kinds of fishes.

While the specimens of the newly discovered animal and its close relatives are rare, the study suggests that the creatures were abundant during the middle Cretaceous period, from around 110-million to 80-million years ago.

“Understanding the African fossil record from the Cretaceous (145- to 90-million years ago) is important for a number of reasons,” says Jinnah.

At that time, the supercontinent of Gondwana, made up of the combined land masses of South America, Africa, Australia, Antarctica and India, had begun breaking up. “The types of animals we find in Cretaceous ecosystems help us hypothesise about how the continents broke up. This is why it is important to look at all members of an ecosystem, even tiny crocodiles, and not just big, meat-eating dinosaurs,” Jinnah says.

“Understanding the palaeogeography from the Cretaceous period, that is, how rivers flowed and where the large rivers were, also helps us understand how African landscapes have evolved through time.

“Africa’s records of sedimentary rocks and fossils are relatively poorly understood and documented, providing opportunity for new work in this area. Earth sciences are very strong in South Africa, and as such, we are in a very good position to be answering these exciting questions.”