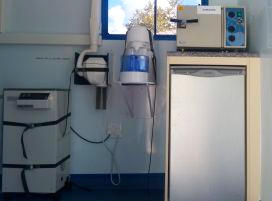 Solar powered health services for Africa may sound improbable, but is not. The idea is a reality, courtesy of Samsung’s Solar Powered Health Centre.

The 7m long truck contains ear, dental, and eye clinics and a mini laboratory where blood analyses can be done. Tests for HIV, malaria, diabetes, high blood pressure and other conditions are available, with results produced immediately. A prescription can be printed and given to the patient on the spot, who then needs to collect the medication from the nearest government clinic or hospital.

The truck was launched in March in Cape Town.

“The centre will move around the country on a regular basis and will not be stationed in one particular area,” says Kea’ Modimoeng, the head of corporate citizenship at Samsung.

The clinic hits the road on 18 April, and will accommodate up to 300 patients every day. It operates with three solar panels on its roof, which can expand to five panels if needed. This is used in conjunction with an unleaded fuel generator, and an external plug is pulled out where there is a power point.

Samsung Electronics is a global leader in consumer electronics and the components that go into them. Through its innovation and research, it has become a leader in smartphones in particular, but also has significant markets in personal computers, printers, cameras, home appliances, medical devices, semiconductors and LED solutions. In total, the company employs 227 000 people across 75 countries.

The vehicle cost Samsung R2.25-million (US$250 000), with equipment and medicines paid for by the company, in consultation with the departments of Health and Social Development, NGOs, pharmaceutical companies and universities to help funding, explains Modimoeng.

Other partners will include medical universities and organisations that are involved in health care, like World Vision and Doctors without Borders.

The idea of the health centre developed over several years. “For years we have been providing medical services to rural areas in Africa through our annual Employee Volunteer Programmes, so we were well aware of how many people were in need of quality medical treatment across the continent,” says Modimoeng.

Samsung Africa’s broader corporate social responsibility strategy involves a sustained focus on three key areas: education, health care, and rural connectivity – in line with the company’s global Hope for Children initiative. This initiative was launched globally to bring attention to the need for childhood education and health care. It was realised that you cannot separate education and health, with the idea that “if a child cannot hear or see properly, they can’t learn properly”.

“People can’t fully benefit from efforts to enrich their lives if their basic needs, such as access to health care, aren’t met.”

Working in rural areas, the company realised that most people had neither the money nor often the time for a long journey to their local clinic. They tended to only go to the doctor when they were gravely ill, sometimes at death’s door. “The Solar Powered Health Centre complements our commitment to both education in Africa and extending basic services to rural communities,” Modimoeng says.

Future plans will take the health care initiative beyond South Africa’s borders, into East and West Africa. Samsung would like to broaden the scope of the medical provision through ultrasound scanning, a mother and child clinic, and general medical practitioner.

And in a neat move, it has combined education and health right at the door of the mobile health centre – a Samsung TV under electronic awnings will screen educational health and sports information while patients wait their turn to see a doctor.

The immediate plan is to reach a million people with the health centre. “This will contribute to Samsung’s bigger goal to reach five million lives in Africa by 2015,” indicates Modimoeng. He says Samsung is “very satisfied” with the progress of establishing the health vehicle so far.

The health centre has its genesis in the Solar Powered Internet School and Electronics Engineering Academy, which were launched in October 2011.

In what it says is a “world-first innovation aimed at tackling the very heart of the problem of rural electrification”, Samsung set up a 12m long shipping container as a solar-powered, mobile and independent classroom. It is transported by truck to remote areas of Africa, providing classrooms specifically designed for areas with limited or no access to electricity.

“Our CSR [corporate social responsibility] strategy in Africa is focused on education, as we believe that this is the best way to improve lives on the continent over time, as well as to ensure our own sustainability in Africa,” states Modimoeng. To date, 200 000 children have benefited, in six countries.

The classroom has fold-away solar panels on its roof, providing power to its equipment for over nine hours a day, and for one-and-a-half days without any sunlight at all. It accommodates 24 pupils, and is insulated and ventilated. It is fitted with a 65-inch electronic board, Samsung notebooks and netbooks, including a solar-powered netbook, and Galaxy Tablets.

The school computers are loaded with the Grade 0 to 12 curricula, covering subjects such as biology, science, mathematics, English, geography and life skills. Teachers from the particular schools are trained to use the technology to teach their lessons. Samsung is partnering with universities in South Africa and Kenya to develop technology content and applications specifically for Africa. “This research work being done in Kenya will be shared with Samsung R&D [research and development] in [South] Korea to ensure that our product planning, design and development is a response to the felt needs of Africa,” according to the website.

“The initiative has already improved many lives in South Africa, and new Solar Powered Internet Schools are set to be launched in Botswana, Lesotho, Rwanda, Ivory Coast, Ethiopia and Angola this year,” enthuses Modimoeng. “It also represents a fusion of two of our core goals in Africa: to support the development of African thought-leaders, and to develop products and programmes that are built for Africa.”

The school has been operating in Tembisa on the East Rand in Gauteng for the past year.

Another project is the Electronics Engineering Academy. Aimed at addressing the critical technical and engineering skills shortage in Africa, in 2011, Samsung launched the academy in South Africa, Kenya and Nigeria as part of the company’s broader goal to develop 10 000 electronics engineers on the continent by 2015.

The academy provides hands-on, vocational training for pupils in grades 10 to 12. Those selected go through a year’s training, comprising basic, intermediate and advanced engineering skills, giving them an opportunity to become an intern at Samsung. Outstanding students stand a chance to participate in a year-long internship at the Samsung headquarters in South Korea, under the 100 African young leaders programme.

The Engineering Academy programme began in South Africa, Kenya and Nigeria in 2011 and will expand to more African countries by 2015.