The first International Renewable Energy Conference was held on African soil in Cape Town from 4 to 7 October. It was agreed that Africa could make use of its abundant natural resources to create sustainable energy. South Africa’s progress in the field was also highlighted. Delegates declared they would upscale and mainstream renewables to achieve a global energy transition. 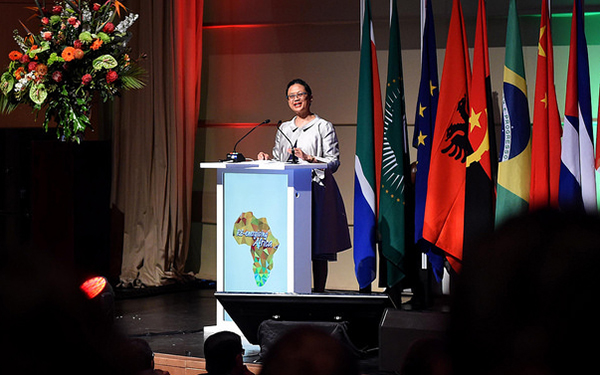 Over 3 500 delegates from 82 countries gathered in Cape Town for the South African International Renewable Energy Conference (SAIREC), which took place from 4 to 7 October.

This was the sixth in the series of International Renewable Energy Conferences; the first was held in 2004 in Bonn, Germany. This year’s conference was the first to take place in Africa; it had the theme of “RE-energising Africa”.

“For us as a country and as a continent, hosting this conference is important, given that Africa is progressing on an economic trajectory that challenges the ability to meet our energy needs,” said South African Minister of Energy Tina Joemat-Pettersson, speaking at the opening of the conference.

• Read the full speech from the minister here

South Africa’s Department of Energy hosted SAIREC in conjunction with the South African National Energy Development Institute and the Renewable Energy Policy Network for the 21st Century (REN21), with support from the German Federal Ministry for Economic Co-operation and Development.

“SAIREC comes at a time when an energy transition towards renewables is accelerating worldwide thanks to advances in renewable energy technologies, increases in capacity and rapid cost reductions,” said the REN21 chairman, Dr Arthouros Zervos.

“On the African continent South Africa is leading the way with its Renewable Energy Independent Power Producers Procurement Programme and is, therefore, the ideal host for such an international gathering.”

Quoting the 2014 Africa Energy Outlook from the International Energy Agency, Joemat-Pettersson said while Sub-Saharan Africa was rich in resources, energy supply was poor. “Africa’s energy sector is vital to its development and yet is one the most poorly understood parts of the global energy system.”

She said producing a reliable and cost-effective energy supply was vital on the continent. “[Africa] accounts for 13% of the world’s population, but only 4% of its energy demand. Since 2000, sub-Saharan Africa has seen rapid economic growth and its energy consumption has risen by 45%.

“Many governments are now intensifying their efforts to tackle the numerous regulatory and political barriers that are holding back investment in domestic energy supply, and inadequate energy infrastructure puts a brake on urgently needed improvements in living standards.”

Watch more on the report here:

Joemat-Pettersson said emerging economies were taking on the challenges to address climate change. “For example, as South Africa we have put in place programmes to increase efficiency and reduce emissions intensity.

Minister Joemat-Pettersson says efforts to roll-out energy in the continent are on the rise, but are outdone by a rising demand #SAIREC2015

Adnan Amin, the director-general of the International Renewable Energy Agency, said Africa had the potential to increase its generation of renewable energy from 5% to 22% by 2030.

“After a decade of sustained growth, Africa is rising but needs secure and affordable energy to power its future growth,” he said. “What we know today is that the potential is immense. Africa has bountiful and buried renewable energy resources, including excellent solar across the continent, hydro in many countries, strong wind resources and powerful geothermal in East Africa’s rift valley.”

He said renewable energy was vital to lift African citizens from what he called energy poverty. 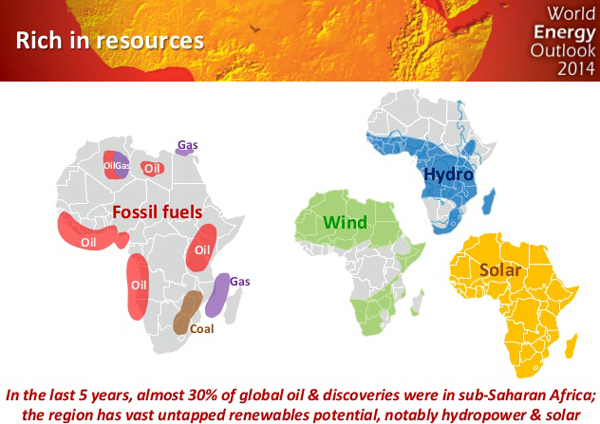 Africa has numerous natural resources to tap into to create sustainable energy for itself. (Image: Slideshare)

South Africa has been making strides in renewable energy. During the conference, the Department of Energy released its report, State of Renewable Energy in South Africa.

Making use of the sun’s rays and strong coastal winds, policy implementation and partnerships with business have led to job creation, foreign investment and clean power production in the sector.

“Renewables are delivering exactly what South Africa needs – from energy, jobs and technology to foreign investment, rural development, and community benefits and working relations between government and business,” said the department’s acting director-general, Dr Wolsey Barnard. “The scope and scale of renewable energy development in South Africa demonstrates what is possible when government and business share a commitment to success.”

The report cites an independent study by the Council for Scientific and Industrial Research, which found energy generated from solar and wind during the first six months of 2015 created R4-billion in financial benefits.

The renewable energy sector, the report states, has the potential to create up to 462 000 jobs, with more than 25 000 jobs already created. Renewables have also given a boost to the manufacturing sector. In 2012, for instance, a solar PV manufacturing plant was built in Pinetown near Durban, employing 160 people and able to produce 250 000 solar panels annually.

A Department of Energy solar energy technology roadmap estimates that by 2050, about 70GW of power could be generated from solar photovoltaic and concentrated solar power sources. 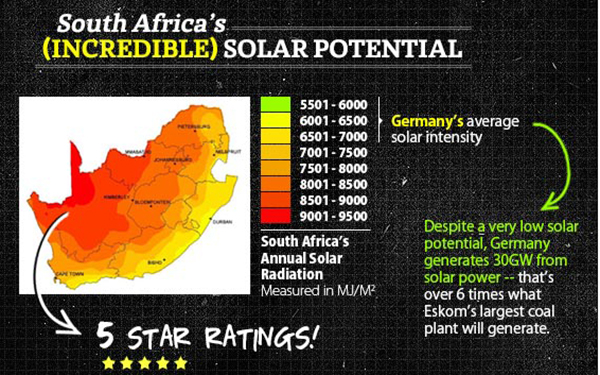 According to Green Peace, South Africa has one of the highest and most stable solar radiations in the world. (Image: Green Peace)

In addition to solar and wind power, up to 247MW of small-scale hydro power could be developed in rural Eastern Cape, Free State, KwaZulu-Natal and Mpumalanga. Work has also started on a national biomass action plan.

In 2014, the United Nations Environment Programme put South Africa in the global top 10 for renewable energy investments. The country is already the world’s 10th biggest solar market for installations above 5MW.

Delegates attending the SAIREC rounded off discussions by agreeing to upscale and mainstream renewables to achieve a global energy transition.

“As of today, 2.9 billion people lack access to clean forms of cooking, which needs to be addressed in order to achieve the universal access target,” stated the declaration. “We note that to make universal access a reality by 2030, 1.3 billion people, out of which 621 million live in the sub-Saharan region, should be provided access to electricity.

“The scale of the challenge requires that all approaches, including grid and off-grid solutions are taken into account and adopted based on an efficiency principle. Rural and urban demands can best be met with a diverse technology mix that takes full advantage of sub-Saharan Africa’s exceptional and sustainable solar, wind, geothermal, biomass, and hydropower resources.”