The proposed new submarine cable will
be the first to link Africa with South
America directly.
(Image: Tyco Telecommunications) 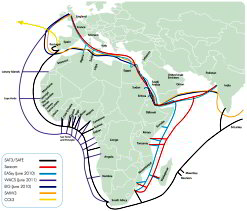 The African continent is now served by
a number of undersea cable systems,
and there is more on the way.
(Image: Telkom)

With the landing of the new West African Cable System on South African soil on 19 April 2011, not long after the implementation of the East African Submarine System (Eassy) and Seacom, Africans could be forgiven for thinking it could not get any better.

However, there is more to look forward in terms of better broadband capacity.

The latest scheme received the blessing of the BRICS nations – Brazil, Russia, India, China and South Africa – at their most recent summit held earlier in April. The five nations are to back the construction of a new undersea cable that will connect South Africa, Angola and Brazil – although they won’t fund it directly.

Known as the South Atlantic Express (SAEx), the cable will initially offer a speed of 12.8Tbit/s. It will connect Nigeria and Angola to Mtunzini in KwaZulu-Natal, South Africa, leave the continent to land at Fortaleza on Brazil’s northeast coast, and then provide onward connectivity to the US through the GlobeNet system.

Mtunzini is already a hub of local connectivity, as it’s the South African landing point for both the Seacom and Eassy cables.

SAEx will be the first cable to cross the south Atlantic, but it will provide extra capacity in the other direction too, to India via Seacom and then using various cable systems to connect Africa to Asian countries, including China.

For Africans, this means a shorter electronic route to the US, seen as the global internet capital and the location of some of the world’s biggest servers. The shorter travelling distance for data will cut down on latency – or the dreaded lag. Most local internet traffic currently arrives in the US via a much longer Europe-north Atlantic route.

SAEx is to be driven by local black-owned technology investment company eFive Telecoms. EFive has contracted Paris-based Alcatel-Lucent to construct the cable through its subsidiary Alcatel-Lucent Shanghai Bell Co, the global corporation’s flagship company in China.

CEO of eFive Lawrence Mulaudzi said his company believes that Africa’s high growth rate calls for the development of such projects.

“The planned submarine network will also provide cable route diversity to South America, making the most economical and operational sense in the current landscape,” he said in a statement.

Early reports hint at Chinese funding for the project, in association with South Africa’s Industrial Development Corporation. The Bank of China could supply up to 60% of the funds.

With planning already well advanced, eFive hopes that SAEx will be operational by June 2013. If all goes well, said Mulaudzi, it may go live in the first quarter of the year.

A number of South African service providers and technology companies are currently involved in upgrading terrestrial communications infrastructure, which will be able to take full advantage of the souped-up submarine capacity.

Among them are local fixed-line operator Telkom, state-owned Broadband Infraco, and two consortiums made up of big-name players in local telecoms, including service providers Internet Solution, Neotel, and Vodacom.