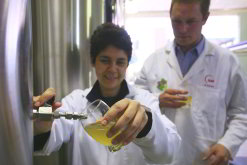 South African Breweries is pioneering
the use of UV-C purification for
ingredients in its fruit alcohol brands.
(Image: SABMiller) 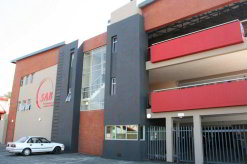 The company has introduced the Surepure
technology in its Chamdor plant, west
of Johannesburg.
(Image: DesignMind)

Next time you chug a local cider, be assured that you are doing your bit for the environment at the same time.

The technology, which is patented worldwide by Swiss-based company SurePure, uses light instead of heat in the purification process.

It replaces the traditional pasteurisation process, which heats a liquid to a specific temperature and holds it there for a fixed period, then cools it quickly to eliminate harmful micro-organisms. The temperature and time vary according to the desired shelf life.

By using light rather than heat, companies will save water and energy and reduce their carbon footprint. The technology also takes up less floor space than the equipment needed for pasteurisation, and is more cost-effective.

Surepure, which has a branch in Cape Town, has seen its technology used in South Africa since 2009, to purify selected brands of wine.

Whereas brewers have used UV technology to purify water, SAB is said to be the first manufacturer to use it for the actual production process. As a result, the company has already saved on energy to the tune of 82%, and anticipates that figure to rise to 94%.

The brewery is currently using the purifier for its popular Brutal Fruit, Sarita and Redd’s brands. However, it is not yet known whether it will use it for beers.

According to Steve Miller, SurePure South Africa’s marketing executive, SAB opted for their technology as the company was looking to save energy and water.

“SAB looked at ultraviolet light as an alternative to heat. We were put up against two international competitors and we were deemed the most likely to succeed [in providing the best purification technology].”

SAB chose SurePure, said Miller, because of its superior efficacy, and because the SurePure UV-C technology is the only one that can be applied both to water and to turbid liquids.

Miller said the technology will be used in the brewer’s Chamdor plant, west of Johannesburg, and may be used in other plants outside the country, too.

Besides the other advantages, the technology offers SAB the opportunity for new marketing claims for premium products, and allows the brewer to make new products with more profit margin.

The SurePure system is competitively priced compared to the pasteurising equivalent but added that utility savings will allow the brewer to quickly recover costs.

UV-C, or germicidal UV, light is highly effective at penetrating the thin cell walls of bacteria and viruses in liquids or on the skin, and is able to alter their genetic material, eventually killing them. Organisms are also unable to develop immumnity to UV-C.

However, if you are worried that the organisms inside your bottle of cider may pose a threat to your health, rest assured. According to Miller, DNA has a short lifespan and the organism will soon die if it can’t replicate.

“The DNA is effectively neutered. There are no negative consequences for the drinker so you know you are getting a good, palatable drink.”

SurePure’s sterilisation potential to be global

According to SurePure’s press statement, the application was developed specifically for SAB in South Africa. It was stated that its parent company, brewing giant SABMiller, is able to globalise the technology but does not have exclusive use of it.

Miller said that the technology has the potential to go global and added that they are already in talks with another large brewing conglomerate.

“Given that most global brewers also enjoy significant carbonated soft drink interests where this technology is hugely applicable, we have no doubt that these companies will find this technology interesting and commercially exciting.