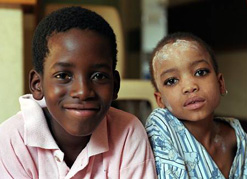 Nine-year-old Sammy and four-year-old
Msizi are tuberculosis patients at Lifecare
Knights hospital in Germiston. The
Southern African region has the highest
incidence of the disease in the world.
(Image: World Lung Foundation)

KwaZulu-Natal University and the Howard Hughes Medical Institute have joined to establish the KwaZulu-Natal Research Institute for Tuberculosis and HIV, a research centre of international standard that will focus on contributing meaningfully to the global fight against tuberculosis (TB) and HIV.

According to the World Health Organisation the disease is the leading infectious killer of people living with HIV and in fact, the two are so closely connected that the term “co-epidemic” or “dual epidemic” is often used to describe their relationship.

In South Africa the dual epidemic is especially virulent, as the country has the highest number of HIV-positive people in the world. Many sufferers contract the extreme drug-resistant strain of TB, which was first noticed in Tugela Ferry in 2005. In the rural KwaZulu-Natal town, 44 people contracted the deadly TB strain – all were found to be HIV positive, and all but one of them died.

However, there is now fresh cause for hope. The KwaZulu-Natal research institute, which has been two years in the planning, was announced simultaneously in Washington, DC, and Durban on 19 March 2009.

As part of its goal of becoming an international centre of research excellence, the institute will also concentrate its efforts on producing a new generation of research scientists that, with training in the field, will be able to competently tackle African issues.

The facility will be housed in a brand-new six-floor state-of-the-art BSL-3 laboratory on the campus of the Nelson Mandela School of Medicine in Durban. A BSL-x classification refers to the biosafety level of a facility, and level three applies to those facilities, whether they are of a diagnostic, teaching, research, or production nature, that work with indigenous pathogens capable of causing serious or potentially lethal disease after inhalation.

Construction of the building is expected to begin in September 2009.

The non-profit Howard Hughes Medical Institute (HHMI), established in the 1953 by the late aviation magnate Howard Hughes, is one of the largest private funding organisations for biological and medical research in the US.

After the Bill and Melinda Gates Foundation, the institute is the second-wealthiest philanthropic organisation in the US with an endowment of a staggering R180.7-billion (US$18.6-billion). It is also the second-best endowed medical research foundation in the world, coming in behind the UK’s Wellcome Trust.

The HHMI will invest committed R583-million ($60-million) into the KwaZulu-Natal initiative over the next decade, providing R29-million ($3-million) in grant funding and for the construction of temporary laboratory facilities in 2009.

Outgoing president of the HHMI, Thomas Cech, said that it was the joint view of the HHMI and the university that substantial investment into research in the heart of the pandemics of HIV and TB will yield major discoveries, and do much to alleviate the suffering caused by these diseases.

“There is no better place on the continent to conduct research into TB,” said Professor Malegapuru Makgoba, vice-chancellor of KwaZulu-Natal University. “The partnership is addressing a real problem that affects real people.”

According to Robert Tjian, the incoming president of the HHMI, the project will have global benefits. “This initiative is one of the most challenging we have embarked upon in our international programme,” he said. “I look forward to seeing how the facility realises the potential for developing new strategies to combat the dual scourge of HIV and tuberculosis – both for South Africa and the entire world.”

The South African institute will focus initially on four core research areas – development of rapid and more effective tests for TB, research into the characteristics of drug resistant strains of TB, analysis of the complex immune response to TB, specifically among those already infected with HIV, and a study of recurrent TB in HIV-positive patients to assess the nature of the recurrence.

Do you have queries or comments about this article? Email Janine Erasmus at janinee@mediaclubsouthafrica.com.