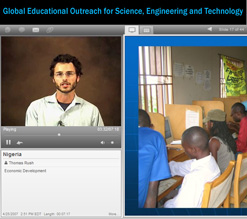 A screenshot of one of the split-screen
podcast presentations offered by the
University of Florida’s Global Educational
Outreach for Science Engineering and
Technology website.

Students at the University of KwaZulu-Natal (UKZN) will now be able to attend lectures any time, day and night, thanks to a new online podcasting programme – the first of its kind in South Africa.

The university believes podcasting will be an important educational tool in the years to come, calling it a “significant development for both staff and students.”

Announcing the programme, the university said that “lectures, including teaching aids and presentations, will be recorded and made available for download on cell phones, IPods and handhelds.”

The project was launched by the UKZNInno-vation, UKZN’s School of Information Systems and Technology (IS&T), the University Research Office and the Core Group. It came at a cost of R1-million (US$125 000), the university said.

“The introduction of podcasting at UKZN indicates that the faculty is at the forefront of innovative methods for improving the teaching and learning experience of all students,” said Prof Lesley Stainbank, dean of the Faculty of Management Studies, in a statement.  “Students will be able to download lectures and listen to or view them at any time to gain a better understanding of the material, or for revision.”

Stainbank said Prof Manoj Maharaj, head of information and technology, deserved credit for coordinating the project’s debut at the university.

Vice-Chancellor Malegapuru Makgoba said the university must adapt to new technologies. “Physical contact is an important aspect of teaching, but we need to make podcasting a normal way to communicate,” he said.

The university plans to expand its podcast programmes across it various campuses in the coming months.

Around the globe, more and more educational institutions are making their courses available on the internet. The Massachusetts Institute of Technology (MIT) outside Boston in the US, for example, plans to place all its offerings on the web for everyone to access free of charge.

According to the New York Times, MIT’s plan is “a 10-year initiative, apparently the biggest of its kind, that intends to create public Web sites for almost all of its 2 000 courses and to post materials like lecture notes, problem sets, syllabuses, exams, simulations, even video lectures”.

Also in the US, Florida State University recently launched its Global Educational Outreach for Science Engineering and Technology, a website that provides podcasts of lectures, conference presentations and more in a split-screen format that shows both the speaker and the presentation slides.

In South Africa, a foremost voice in the role of emerging technology in academia is Prof Derek Keats, the deputy vice chancellor of knowledge and information management at the University of the Witwatersrand in Johannesburg. Keats says the relatively slow and expensive bandwidth in South Africa now restricts the use of technology, but next year, when the country’s bandwidth is set to expand, there will be an explosion of such uses.

“Fairly basic cell phones and MP3 players are the consumer technologies that have the most potential in [higher education] in South Africa,” says Keats.  “Those institutions that are best able to exploit messaging and MP3 audio capability will have an edge on this space because they will have built the educational processes that can be adapted to new consumer technologies as they become available.”

“Those institutions that begin to experiment with video technologies and streaming in 2009 will have a lead in 2010 when bandwidth is less of a limitation,” Keats says. “This will again be mainly because they will have developed the pedagogical and educational processes that can be adapted as the bandwidth environment improves.”