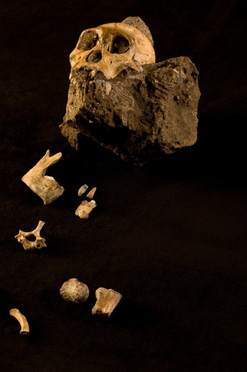 The skull and skeletal fragments of the
juvenile male fossil Australopithecus
sediba, a newly discovered species of
hominid. 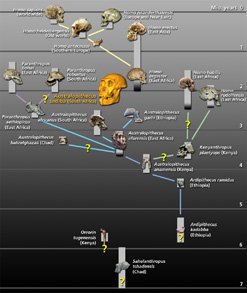 Human evolutionary tree showing the
position of Australopithecus sediba, by
Peter Schmid of the University of Zurich.
(Click on image to enlarge.)

As I stare at the skeleton of this human ancestor in its glass case I find the idea difficult to grasp: this boy walked this very area of the earth almost 2-million years ago.

An entirely new species of hominid, or ape-man, has been described following the discovery of two 1.9-million-year-old fossilised skeletons in the Cradle of Humankind near Johannesburg.

Named Australopithecus sediba, the creatures had long ape-like arms and short powerful hands, so they probably retained their ability to climb trees. But they also had a more advanced pelvis and long legs that would have allowed them to stride and possibly run like modern humans.

The skeletons, of a boy between 11 and 13 years and an adult female in her late 20s or early 30s, were unearthed by a team from the University of the Witwatersrand (Wits), led by professors Lee Berger and Paul Dirks. Berger is a palaeoanthropologist at Wits and Dirks a geologist based at the James Cooke University in Australia.

Fragments of the boy’s skeleton were on display at the announcement of the find on 8 April at Maropeng, the visitors’ centre of the  Cradle of Humankind World Heritage Site.

Berger believes Australopithecus sediba is likely to be the transitional species between the southern African ape-man Australopithecus africanus, such as the Taung Child and Mrs Ples, and either Homo habilis or even a direct ancestor of Homo erectus – Turkana Boy, Java man and Peking man.

The australopithecines are believed to be the ancestors of species in the genus Homo, which includes modern humans. The find, which Berger describes as the Rosetta Stone of human evolution, promises to turn the palaeontological world upside down. Homo habilis will have to be re-examined, and textbooks rewritten.

“It is estimated that they were both about 1.27 metres, although the child would certainly have grown taller,” Berger said. “The female probably weighed about 33 kilograms and the child about 27 kilograms at the time of his death.

Australopithecus sediba‘s environment would have been a mix of open savannah grassland and forest.

The fossils were deposited in a single debris flow and were found together in the remains of a deeply eroded cave system. It’s likely that they died at about the same time, and could have known each other, or even been related.

Berger, whose 11-year-old son Matthew found the first fossil, expects many more fossils to be excavated from the site. With 130 bone fragments recovered, they are the most complete hominid skeletons ever found. And Berger is confident that the site will yield the missing pieces.

Sediba is Sesotho for spring, fountain or wellspring, and the species so named because it is hoped that “a great source of information will spring from the fossils”.

The find is the cover story of the prestigious journal Science, with two articles, written by Berger and Dirks, published on 9 April 2010.

“I am having the adventure of my life,” Berger said.

Berger and Dirks have assembled a team of around a dozen international scientists to work on the find. In total, some 60 scientists from around the world have been involved in unravelling the discovery.

The first step was a geological study, to help determine the age of the fossils. Other dating techniques included assessing the uranium lead components in the rock, establishing its magnetic polarity, which changes over time, and studying the site’s rate of erosion.

Dirks studied the context of how the fossils landed in the cave, taking a series of sedimentary deposits and making a detailed description of different rocks up to two metres deep.

Investigation revealed that the fossils were deposited by a muddy flow of water, which probably carried the two bodies at the same time, because they were found together. Other fossils found were a 1.5-million-year-old sabre tooth cat, and 2.36-million-year-old wild cats and dogs.

The erosion rate of the opening was measured, and it was established that it had been between 30 and 50 metres deep.

“The animals probably smelled the water in the cave, and fell into the cave trying to get to it,” said Dirks. They would have died almost immediately, and their bodies carried down into a deeper chamber of the cave, joining others that suffered the same fate. This is supported by the fact that the fossils have no scavenger or insect damage.

Excavations have not yet begun, says Dirks, only the surface has been cleared.

This adventure began some 18 months ago, in early 2008, Berger said. He first charted the area on Google Earth, finding 600 new sites in the Cradle of Humankind, and then walked it with his dog, Tau.

On the day the first fossil was found he and Matthew, then nine, were walking with post-doctoral student Job Kibbii and Tau. They walked to the edge of a pit, and Berger encouraged the others to look around.

“Within one and a half minutes Matthew called out that he had found something,” said Berger. At first he thought it was a fragment of antelope, a common find. Then he recognised the fossil as the collar bone of a hominid.

He soon found other fragments – a scapula or shoulder blade, normally never found because it is so fragile and erodes quickly – and arm bones, while two hominid teeth “fell into my hands”.

Matthew said he has been on sites with his father more than 20 times, and intends to become a palaeoanthropologist too.

Professor emeritus Philip Tobias, present at the announcement, described the area as a “treasure chest”

“I am thrilled that our expectations of the cradle area have so soon been realised,” he said. “This evidence a kilometre or two from Sterkfontein has yielded several hominid individuals and that is something to get very excited about.”

Describing the find as “ä great joy”, Tobias said that the fact that two skeletons had been found means that it allows scientists to study a family or community which is much more valuable than studying individual fossils.

Children in South Africa have been invited to come up with a name for the skeleton of the boy.

The fossil will be on display at Maropeng until 18 April, and will then move to Cape Town for the launch of Palaeo-Sciences Week from 19 April. It will again be on display at the Origins Centre at Wits during May.