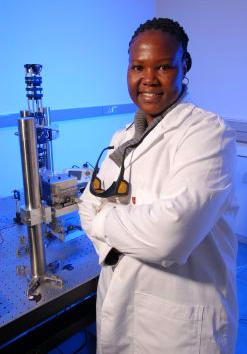 Dr Patience Mthunzi has been named one of 20 ‘Youngest Power Women in Africa 2012’ by Forbes Magazine. 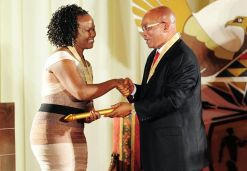 In April last year, Mthunzi was honoured by President Jacob Zuma with the Order of Mapungubwe in Bronze, one of the country’s highest national awards, for her local and international contribution in biophotonics. (Images: CSIR)

A South African scientist has been named one of 20 ‘Youngest Power Women in Africa 2012’ by Forbes Magazine. These are women – all under the age of 45 – who are bringing about positive change on the continent by influencing African business, technology, science, policy and media.

Dr Patience Mthunzi, a scientist at the Council for Scientific and Industrial Research (CSIR), was recognised for her pioneering work in the area of biophotonics, a field of science that enables microscopic study of biological molecules, cells and tissue using laser.

Mthunzi is one of only three South Africans to be listed in the magazine – the other two are both prominent figures in the media industry.

She heard about the listing late in December last year, and she says making it onto the prestigious list was completely unexpected. “I feel so honoured and humbled for being one of the three South Africans to have made it onto this list,” she says.

Mthunzi is fast gaining an international reputation for her work, and she says although she doesn’t work for accolades, the recognition inspires and motivates her to do more.

In April last year, she was honoured by President Jacob Zuma with the Order of Mapungubwe in Bronze, one of the country’s highest national awards, for her local and international contribution in biophotonics. This order is awarded to South African citizens for excellence and exceptional achievement.

As she was unable to study biophotonics at a local university, Mthunzi became the first South African PhD student at the School of Physics and Astronomy of the University of St Andrews in Scotland.

Biophotonics is an emerging area of science in South Africa. Mthunzi explains that it is a versatile, multi-disciplinary field that can be applied to find solutions for challenges in areas such as medicine, agriculture, environmental and life sciences.

Research conducted under the umbrella of biophotonics involves disciplines such as physics, biology, medicine and engineering.

Part of Mthunzi’s job description is to come up with novel ideas, and that is what she loves most about her work.

She’s leading a project to determine possible medical applications using laser technology. “The field has applications for any disease,” she says.

She is developing an HIV testing device that makes use of lasers to test blood samples.

The device will be particularly useful in remote areas of the country and could change the way HIV testing is done. “Often people in rural areas have to walk long distances to clinics to get tested,” she says. “By the time they get there, it is too late to draw blood and send it with a courier to be tested at a laboratory elsewhere.”

Mthunzi explains that the testing tool would be based on site at a clinic. She would like to design the device in such a way that it doesn’t require a medical professional to operate it.

“It will be possible to get results immediately and will be easy to use, even by volunteer staff who receive some training,” she says.

She is also working on introducing DNA and genes into stem cells and finding applications for lasers in the treatment of cancer. “Our cancer research is looking into ways to separate cancerous and non-cancerous cells,” she says.

Mthunzi’s interest in the field developed when she joined the CSIR’s Laser Centre in 2004, as a biochemist. “I didn’t even know what a laser was,” she recalls. “I was encouraged to do a PhD in laser physics, and I found the field very exciting.”

She’s always had an interest in various branches of science such as medicine, physics and natural sciences and even zoology. “I see science in everything,” she says.

With biophotonics, she can experiment in all these areas, but Mthunzi says the country needs researchers who are experienced in multiple disciplines.

“If I only knew biology, I would be limited in what I can do and come up with,” she says.

“Some people call me a hybrid because my undergraduate qualification and my Master’s are in biology, followed by a PhD in physics, but I see myself as just a scientist.”

Her peers in laser research are mostly physicists and from that perspective her biology background is somewhat unusual. “But it has equipped me perfectly for the job,” she says.

Growing biophotonics and science in SA

Mthunzi set up a fully functioning biophotonics laboratory at the CSIR and the facility is closely integrated with nearby optical laboratories on the council’s campus in Pretoria. The laboratories are within walking distance of each other, which makes research work much easier.

She says South Africa needs more scientists and she enjoys promoting the field. She belongs to the South African Young Academy of Science, an organisation that contributes towards the development of scientific capacity and awareness in South Africa and promotes science at all levels of education.

What she would like to see is a greater interest in biophotonics in the country. Mthunzi hopes that in the future biophotonics will become an established discipline locally and be taught as a degree.

She says young people also need mentors to inspire them because that’s what helped her achieve her goals.

“What helped me as a child is being surrounded by good mentors,” she says. “My aunt was my mentor. She was such a guru. I wanted to be just like her.” The aunt was a teacher and the first person in her family to obtain a Master’s degree.

Two other South African women, both prominent figures in the media industry, were also recognised by Forbes Magazine.

Yolanda Sangweni is a senior editor at ESSENCE.com, one of the leading publications for black women in the US. She is also the co-founder of AfriPOP!, an online magazine that focuses on contemporary African youth culture, music, fashion and film from an Afropolitan perspective.

Journalist, broadcaster and author Redi Tlhabi is the producer of a documentary on the former South African president Thabo Mbeki. She is also a columnist for the Sunday Times newspaper and author of Endings and Beginnings: A Story of Healing, a book based on her childhood experiences. Tlhabi is the host of a new talk show on Al Jazeera English television channel that will focus on politics, culture, music, health and science.