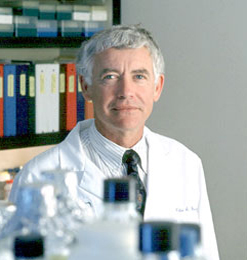 Instead of killing cancer cells with chemotherapy or radiation, the new form of therapy activates dormant genes in the affected cells and instructs them to become healthy again.

During an international clinical trial, the new type of therapy was found to boost some patients’ survival rate from 26% to 50%. The results were published in the British medical journal Lancet in March 2009.

Jones emigrated to US in the 1980s and is currently a professor of urology, biochemistry and molecular biology at the University of Southern California.

Together with Dr Stephen Baylin of the Sidney Kimmel Comprehensive Cancer Centre at Johns Hopkins University in Baltimore, he has formed the Dream Team project, which aims to bring the promise of epigenetic therapy to clinical practice. The focus of the project, made possible with a US$9.12-million (R73-million) grant, is on breast, colon and lung cancers as well leukaemia.

Jones and Baylin’s effort is funded by Stand Up To Cancer, a US-based charity that supports research on new cancer treatments.

During his stint at Stellenbosch Medical School Jones tried to see whether cancer drugs could trigger cancer in basic – as opposed to specialised – human cells. During this investigation, quite by chance, he and a graduate student found that a basic human cell, once treated with a little-known drug called “aza-c”, started to beat, like a heart.

The aza-c had somehow switched on the cell’s genes, turning it into a specialised muscle cell.

This gave Jones the idea that the drug could ”turn off” genes in cancerous cells and transform them into healthy ones.

“I can still remember being there in the lab at Tygerberg when my grad student ran in and said, ‘My God, I just saw these cells twitching.’ It was completely accidental,” Jones told the Sunday Times.

Cancer drugs that have developed from the initial aza-c findings have shown promise in treating acute myelogenous leukaemia and a group of diseases called myelodysplastic syndromes.

Jones’s work has attracted a number of accolades. In 2008 he was awarded South Africa’s highest cancer research award, the AG Oettle prize, and in 2009 he scooped the prize for basic cancer research from the American Association for Cancer Research and the Kirk and Dorothy Landon Foundation.

“It’s very rare in science that you can say the work of individual investigators revolutionises cancer research, but Peter Jones and Stephen Baylin have achieved that kind of paradigm shift,” said Margaret Foti, the association’s chief executive officer.

“Their work has changed the way we view molecular causation from a genetic to an epigenetic focus. The potential impact of this work is enormous, and it is already resulting in significant improvements in cancer diagnosis and therapy.”

Dr Carl Albrecht, head of research for the Cancer Association of South Africa and a former colleague, said Jones’s work represented “the great new hope” in the war on cancer.

“I would not be surprised in the least if Jones were to win the Nobel Prize,” Albrecht told the Sunday Times. “This could prove to be one of South Africa’s greatest gifts to the world,” he said.

Jones said the work he began while in South Africa led to a “whole new field of science in the world”.

“Something was done in South Africa that has launched a serious new hope,” he said.