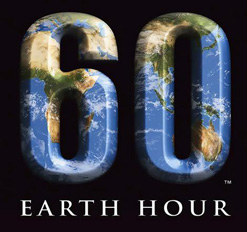 Millions of people around the world will
mark ‘Earth Hour’ by switching off their
lights in a bid to highlight the need to
conserve energy.
(Image: Earth Hour)

South Africa will be joining 1 189 cities and towns across the world to mark Earth Hour, when all participating households and businesses will switch off the lights for an hour on 28 March.

Cape Town, Johannesburg, Durban, Franschhoek and Stellenbosch are part of 39 cities and towns that will be celebrating Earth Hour in South Africa, which will start from 8:30pm and last until 9:30pm.

Organised by the conservation group World Wildlife Fund (WWF), the event has already far exceeded the ambitious target of 1 000 cities in 25 time zones set out by the organisation.

“There’s a palpable excitement about this event. Not just because it’s a massive global undertaking involving millions of people, but because it deals with a very important issue, namely the need for global action on climate change.”

To mark this historic event, millions of people across the globe will gather in parks, streets, town squares and homes to watch the lights going out on iconic landmarks and city skyscrapers.

Popular landmarks around the world such as Cape Town’s Table Mountain, Australia’s Sydney Opera House, the Wat Arun Buddhist temple in Bangkok, the Coliseum in Rome, Stockholm’s Royal Castle, London’s City Hall, New York’s Empire State Building, Sears Tower in Chicago and the Golden Gate Bridge in San Francisco will all shut down for an hour.

Influential companies have also jumped on the bandwagon and are now encouraging their clients to join in this campaign.

Internet search engine Google will also switch off for on hour in solidarity with the campaign.

Users of the blackberry mobile business phone have also been asked to turn off their phones for an hour.

The first Earth Hour began in Sydney in 2007, when 2.2-million homes and businesses switched off their lights for a full 60 minutes.

In 2008, the story of the event grew into a global one, when 50-million switched off their lights. This is the first time however, that that the campaign is now spread across the world in all continents.

People of all ages, nationalities, race and background, will now have the ability to use something as simple as their light switch, to vote for saving the earth, instead of voting for global warming.

It is hoped by WWF that every person who switches off their lights will be “vote earth” and each vote will be counted towards petition target of one billion votes, which will be presented to world leaders at the Global Climate Change Conference in Copenhagen later this year.

At this meeting, official government policies to be used to take action against global warming will be determined. These will replace the Kyoto Protocol.

To spread the message, a vigorous marketing campaign, mostly carried out by the media and through social networks such Facebook and Twitter, was carried out.

In keeping in line with the global event, South Africa’s electricity utility Eskom has called all South Africans to participate in the worldwide climate change awareness programme.

The parastatal says the national “switch off” event will form part of a tangible way of demonstrating solidarity and support for the Earth Hour global awareness campaign.

“This will by far surpass the 2008 event, when people in 35 countries participated,” said Eskom corporate services Managing Director Steve Lennon in a statement released by the company.

“As part of its support for the campaign, Eskom will be measuring the reduction of electricity used during the hour against typical consumption for this time on an average Saturday evening,” he said.

According to Lennon, turning off the lights for an hour in South Africa, will benefit the country, as hundreds of tons of coal will be saved from burning to produce electricity.

Lennon said that every kilowatt-hour of electricity saved amounts to a reduction in carbon dioxide emissions of one kilogram.

In a bid to decrease its carbon footprint, the electricity utility has adopted a six-point climate change plan that commits it to reduce its greenhouse gas emissions in South Africa.

The plan will concentrate on using lower carbon-emitting technologies; adopting energy efficiency measures to reduce demand for electricity as well as greenhouse gases and other emissions.

The plan will also adapt to the impacts of climate change; innovating changes through research, demonstration and development; investing in carbon credit market mechanisms, and making progress in climate change mechanisms through advocacy, partnerships and collaboration.

To celebrate Earth Hour, a free “Concert in the Dark” will take place at the popular V&A Waterfront in Cape Town.

The event will coincide with the Mother City’s iconic landmark, Table Mountain having its lights turned off for an hour.

The concert, sponsored by Philips Lighting SA, will include boast a performance by the Cape Philharmonic Orchestra (CPO), which will play for free, in support of Earth Hour.

A marimba group Ethnic Rhythm will also supply music on that night.

Speaking on its involvement in the campaign, CEO of the Cape Philharmonic Louis Heyneman said, “It is an honour for the CPO to make its contribution to a global initiative like Earth Hour, and to present the power of music in a different light.”

The orchestra will play a repertoire including a number of light classics such as, Von Suppe’s Light Cavalry Overture, Johan Strauss II’s Blue Danube Waltz, and Johannes Brahms’s Hungarian Waltz No 5.