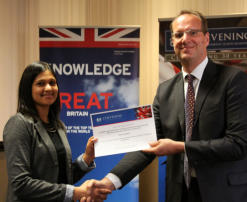 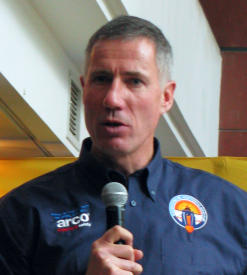 Wing commander Andy Green, who will attempt to break his own land speed record set up in 1997 in the Thrust SSC, inspired Singh to apply for a spot on the Bloodhound team.
(Image: Janine Erasmus) 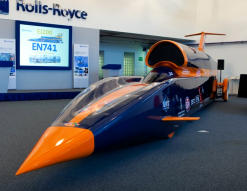 The Bloodhound SSC has been years in development, and will be ready to break the land speed barrier by 2015.
(Image: Bloodhound SSC)

South Africa’s Beverly Singh, an engineering graduate from Port Elizabeth, is the first recipient of the Bloodhound SSC Chevening Scholarship – she will work with the construction team on the final assembly stages of the supersonic car, while pursuing a master’s degree in mechanical engineering.

The Chevening programme singles out scholars with leadership potential from around the world, and gives them the chance for postgraduate studies at universities in the UK. For the 2011-2012 round of applications, the number of scholarships was increased to more than 700 worldwide. Of these, about 30 will come from South Africa.

To date, there are over 40 000 alumni from 116 countries, excluding the US and EU. Singh joins previous recipients such as Iceland’s prime minister Sigmundur Davíð Gunnlaugsson, Jaime Bermudez, the Colombian minister of foreign affairs, former Polish prime minister Marek Belka, and Lili Wang, the vice-governor of the Industrial and Commercial Bank of China.

A process engineer at Kestrel Renewable Energy, a company that builds wind turbines, Singh graduated in 2008 with a diploma in mechanical engineering and in 2012 with a Bachelor of Technology degree – both from the Nelson Mandela Metropolitan University. She completed her practical training at General Motors South Africa and also worked at Eveready.

She is now preparing to join the Bloodhound development team in the UK in September, while she studies for a master’s degree at the University of the West of England in Bristol.

“The university has great research facilities and is in partnership with great companies – Rolls Royce, Boeing, etc. – and I’m also looking forward to travelling and meeting new and interesting people,” she said.

Singh will work with the supersonic car’s team at their technical facility in the Bristol suburb of Avonmouth. Bloodhound is scheduled to come to the speed run site of Hakskeen Pan in the Northern Cape in 2015 for a series of test, during which it’s expected to break the current land speed record of 1 221 km/h.

The university is already involved in the Bloodhound project and was one of its founder sponsors.

Singh received her scholarship from the UK’s deputy high commissioner Martin Reynolds, at a function in Johannesburg in mid-August.

“In 2011 I attended a lecture by [Bloodhound driver] Andy Green at the university, where he explained what they are trying to achieve, and the engineering challenges, and I was inspired,” she explained. “On the website of the SA Institution of Chemical Engineers I saw an ad for the scholarship and I knew it was definitely something I want to be a part of.”

Singh attributes her love of engineering to a grandfather who enjoyed working on cars, and from an early age she was hooked. “I was always interested in learning about technology and how things work, and the logical and practical side of it, and that got me into engineering.”

She is keen to gain new knowledge and skills in the engineering field. “I share Bloodhound’s passion for education and sharing knowledge, and inspiring young students to get more involved in engineering, science and maths.”

Singh would ultimately like to establish a manufacturing training facility for young South Africans, where they can learn crucial skills that will boost the country’s economy.