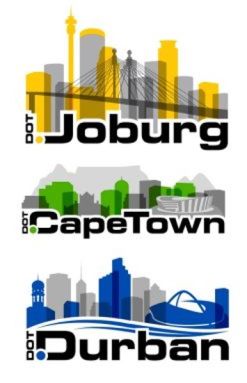 Johannesburg, Cape Town and Durban will have its own online domain names by October this year.
(Images: Zadna)

In the near future, Johannesburg, Cape Town and Durban may have their own top level domain names on the internet, which could spark innovative ways of promoting business and tourism in each city. The suffixes dotJoburg, dotCapetown and dotDurban will be launched later this year.

GM of the ZA Domain Name Authority (Zadna), Vika Mpisane, said the suffixes are available to any entity, even multinational companies, who wish to be associated with these cities. “It will be open to anybody who identifies with them.”

Zadna, which is the regulator for South Africa’s internet namespace, will launch the domains by October. However, Mpisane said registration will initially not be open to the public. Instead municipalities of these cities will be given first preference when choosing names before the public are invited to register.

Zadna held a workshop in Johannesburg last month where they brought together representatives from all three cities. It was here that delegates were asked to draw up a list of names they would like to use. Zadna also used the gathering to explain the plans for the launch, and operation of the three domains, and to start a consultative process that will allow the municipalities to influence policy.

Mpisane said the benefits of a city having its own domain is that it helps build the brand and allows the municipalities to house all their services within a name. “If you have ‘rates dotJoburg’, the user will know that it is safe.”

According to Johannesburg Tourism Company’s communications manager, Laura Vercueil, the domain name would help promote the city as a gateway and hub of Africa. She added that the city is more than just about money and business. “DotJoburg will promote a sense of place. For us it is about making people aware of how vibrant the city is.”

After the municipalities have been registered, the public will be able to purchase names on a first-come-first-serve basis. Organisations and individuals outside of the government can expect to apply for their domain names early next year. They are required to pay R150 (US$15) a year for their website to be hosted.

For the suffixes to be approved, the Internet Corporation for Assigned Names and Numbers (Icann) has to evaluate them.

Icann, which governs the global domain name market, held a prioritisation draw in Los Angeles in December last year. Applications were evaluated in the order they were chosen. Durban’s suffix drew position 303 and Johannesburg followed at number 566. Both names have been evaluated and are going through the approval process. Cape Town, which came in at 761, is still waiting to be evaluated.

Icann currently has more than 2 000 applications for top level domains in their system, all of which brought in $352-million (R3.5-billion) in application fees.

There are two evaluation processes that domains have to undergo before being approved. Icann first assesses the stability of the infrastructure that will run the domain. Thereafter, it checks if the domain names can be sustained financially. Once the names have been evaluated and approved, ZA Central Registry (ZACR), which is the registry for South Africa’s second level domains, has to enlist the three domain names for $185 000 (R1.8-million) each. Thereafter, ZACR is required to pay a $25 000 (R255 000) annual licence fee per domain.

Mpisane said Zadna would be running the names on the same infrastructure that is used for the co.za domain. He added that ZACR will pay the annual licence fee until the organisation has acquired enough clients to fund it. Zadna is looking to grow its client list in the next two years and become self-funding by then.

Zadna will first market the domain names to more than 300 internet service providers on the ZACR registry. Mpisane said they would offer ISPs incentives for selling the names. Thereafter, they will make the public aware of the domains through workshops and roadshows.

Zadna is unable to protect the domain names from users who wish to utilise it for unsavoury purposes. “We are only required to look at domain name issues, not how users use them.”

But companies and individuals whose trademarked names are being abused may use Zadna’s alternate dispute process to settle legal matters, concluded Mpisane.