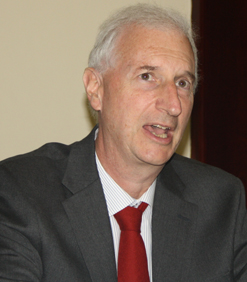 According to Ira Magaziner, chairperson of
the Clinton Climate Change Initiative, the
Northern Cape province has one of the
best solar radiation indexes in the world.
(Image: Nicky Rehbock) 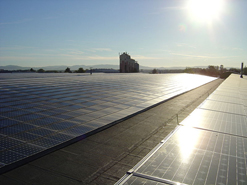 South Africa’s giant solar park will use a
combination of technologies which will be
able to meet peak and baseload power
demands.
(Image: Wikimedia Commons)

South Africa is planning to build a R150-billion (US$21.8-billion) solar park in the Northern Cape province which, according to a pre-feasibility study, has some of the best solar radiation conditions in the world.

This is according to Ira Magaziner, chairperson of the Clinton Climate Change Initiative, which is partnering with the government to bring the park on line.

At a recent press briefing in Johannesburg, Magaziner said the study found that the strong and consistent sunshine in the province, large tracts of suitable and available land and proximity to electrical transmission points made it the ideal location for a solar park.

Further advantages include the availability of water from the nearby Orange River and easy access to a good road network and airport.

The park will be set up in sections over the next nine years, but the first portion could be operational as early as 2012.

Magaziner was in South Africa for the official announcement of the Solar Park Investors’ Conference planned for 28 to 29 October this year. The conference will be key to securing finance for the project – most of which is hoped to come from the private sector.

The multibillion-rand facility will be built over thousands of hectares and provide 5 000 megawatts (five gigawatts) of power, which will be fed into the national electricity grid.

Considering that one of the largest solar parks in the world today, the Olmedilla Photovoltaic Park in Spain, generates 60 megawatts of power on a sunny day, the South African version will be in another league.

The spinoffs of such a large-scale development are job creation, greater demand for locally manufactured solar components and a more stable power supply – which will also be kinder on the environment as there will be less dependence on fossil fuels.

Solar power has been slow on the uptake in the past, as South Africa has largely used its vast coal seams to produce electricity. But with coal being an expendable resource, and coal-fired plants being heavy pollutants, solar is fast becoming a viable alternative.

Because the South African solar park will use technology that is able to meet peak and baseload power demands, it will also help relieve pressure on the national grid.

With rapid economic expansion and a growing population, the country has to create an additional 40 000 megawatts of power over the next 20 years, according to the Department of Energy. But it can’t do this by relying on only one source, hence the department’s decision to turn to a mix of energies – coal, nuclear and renewables – which include solar.

According to Magaziner, the global solar industry is still in its infancy, with less than 25 gigawatts of installed generation capacity worldwide, but this should change over the next decade.

Increased use of new, improved technology and appropriate government policy could make the price of solar competitive with fossil fuel-fired power, he added.

Unlike coal-fired or nuclear stations, large-scale solar plants can be built in increments, spreading the cost over time. Once operational, they are very cheap to operate, Magaziner said.

By 2020 solar power should be less expensive than it is today, as there are opportunities to cut costs through engineering improvements. In contrast, the cost of coal-fired power is likely to increase, as the technology is mature and fossil fuels price hikes are likely.