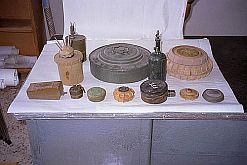 Landmines such as these pictured cause
devastation during wars as they do not
discriminate between combatants and
civilians, who end being dismembered
and killed.
(Image: Wikipedia) 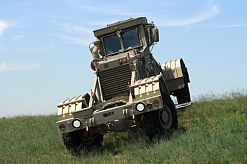 The Husky 2G is used to clear the path
of mines for the military and civilian
personnel during combat.
(Image: RSD)

The locally made Husky 2G Vehicle Mounted Mine Detector (VMMD) has been named one of the top 10 greatest military inventions by the US army, proving that South Africa’s engineering ranks among the best in the world.

The recent announcement was made in Washington DC at the annual meeting of the Association of the US Army.

A ceremony held during the meeting paid tribute to inventions which have improved the lives of soldiers around the world.

Scott Fish, US army chief scientist, commended the inventions and the brains behind them by saying: “They are all driven by a deep desire to make things better and are not satisfied with a concept of utopia. They go beyond that: they make something real and they make it happen now.”

Fish compared the inventions to Apple products for their simplicity and ease of use, paying homage to Apple co-founder Steve Jobs, who recently passed away.

Addressing delegates at the ceremony, Heidi Shyu, acting assistant secretary of the US army, said: “Anything you do to innovate and help our soldiers is incredibly appreciated by the folks who are deployed. I am so impressed. Thank you for what you do for our soldiers.”

The VMMD was designed and developed by DCD-Dorbyl’s Rolling Stock and Defence Division.

The two-seater vehicle is used to detect and clear the field of mines before army and civilian personnel move in.

The Husky 2G is a derivative of the single-seater Husky Mark III, which has been used in combat since the early 1980s. It has helped clear mines in the Balkans, Africa, Asia and the Middle East.

According to DCD-Dorbyl’s defence division, what makes the VMMD stand out from other mine-detection systems is its ability to pass over pressure-fused anti-vehicle landmines without detonating them.

The system is so durable that in the event of a mine being detonated, any damage can be repaired within two hours.

Nearly 400 of these South African-made systems have been used throughout the world in combat situations.

The nominations for the best inventions were put forward by veteran combat soldiers.

The Enhanced Performance Round is a modified type of bullet used by US forces in Afghanistan, which has a larger steel penetrator on its tip.

The Lightweight Medium Machine Gun is a less bulky derivative of the existing M240B machine gun.