In a move away from his army career, Britain’s Prince Harry is spending three months in southern Africa, where he will learn about poaching and the measures put in place to increase the conservation of threatened animals such as rhino and elephant. 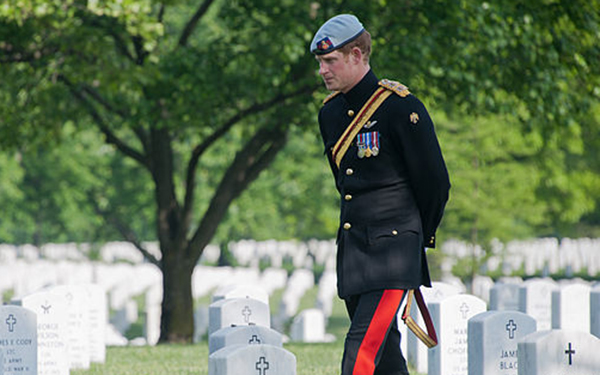 Britain’s Prince Harry has quit the army after a decade of service. He is spending time in southern Africa to learn about poaching and conservation. (Image: Wikipedia)

A prince and soldier, with a reputation of notorious party goer, Britain’s Prince Harry is adding another label to his name – conservationist. After 10 years of service in the British Army, during which he was deployed twice to the frontline in Afghanistan, the prince is now spending three months working in wildlife conservation in southern Africa.

“The programme will cover a variety of activities in Namibia, South Africa, Tanzania and Botswana,” said Kensington Palace. “Prince Harry will learn about environmental education programmes and see up close the importance of linking the long-term future of southern Africa’s wildlife with the sustainable development of the communities who live alongside the wildlife.”

The prince will work with a number of experts in the field. “He will join a team of rangers who are the first to respond to reports of poaching attacks on elephants and rhino,” the palace said.

“He will for a time work alongside some of the world’s leading veterinarians who act to save animals who have survived barbaric attacks, including the removal of their tusks. And he will also work with park managers to learn about new technologies being used to enforce site protection.”

Wherever possible, the prince will be fully embedded with the conservationists and frontline staff with whom he will work, including sharing the same accommodation.

In his brother’s footsteps

Prince Harry’s brother, the Duke of Cambridge, Prince William has also been active in conservation on the African continent. The latter’s United for Wildlife partnered with the Zoological Society of London (ZSL) for conservation work and the organisation has been instrumental in drawing up his brother’s programme.

“Prince Harry will be working on the ground gaining experience in areas facing some of the greatest conservation challenges,” said Jonathan Baillie, director of conservation programmes at the society. “We at ZSL have been delighted to play a part in pulling together a programme that will be tough, but rewarding.

“After this period, Prince Harry will be one of the best-informed ambassadors for the conservation community on what is really happening on the ground in Africa. His experience will be of great value.”

Increased poaching over the last decade has severely reduced the numbers of elephant and rhino. The animals are killed illegally for their tusks and horns, which some believe carry medicinal properties.

According to Save the Rhino, 1 215 rhinos were killed in 2014, which is about one rhino killed every eight hours. 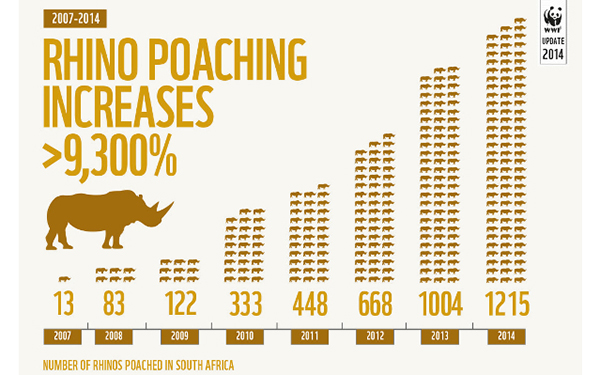 Rhino poaching has been growing since 2007. (Image: Eco Watch)

Elephants have not fared any better. “It is estimated that 30 000 to 38 000 elephants are poached every year for their ivory,” according to SOS Elephants. “With statistics like this the African elephant is doomed [to] extinction in 15 to 20 years.”

The second son of Prince Charles and the late Princess Diana is now fifth in line to the British throne after the birth of his niece, Princess Charlotte. She was christened on 5 July; an event Prince Harry missed as he was in Africa.