Locally designed and engineered, the
Rooivalk is the pride of the South African
Air Force.
(Image: Janine Erasmus) 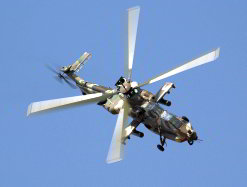 The Rooivalk is known for its agility,
and can even fly upside down.
(Image: Denel) 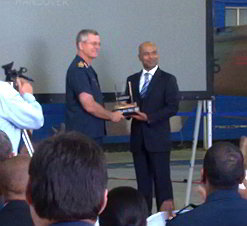 The locally developed attack support helicopter Rooivalk was officially handed over to the South African Air Force (SAAF) at a ceremony at the beginning of April 2011.

This comes after 26 years of design, development and fine-tuning – as well as controversy, with rumours of the project’s cancellation occasionally circulating among the public.

The Rooivalk (Afrikaans, meaning “red kestrel”) Mark 1 was developed and engineered by Denel Aviation, based in Boksburg, east of Johannesburg, on the border of OR Tambo International Airport.

South Africa is now one of only nine countries to have developed its own attack support helicopter.

“This is a milestone in the local aviation industry,” said CEO of Denel Aviation, Mike Kgobe, speaking at the ceremony.

Denel’s group CEO Talib Sadik agreed, saying that the handover marked a quarter of a century of hard work by the country’s top engineers, and was a catalyst for technological growth in the local aerospace industry.

“Our fully certified and world-class product is a triumph for South African engineering and defence,” said Sadik. “This is a product that the South African public can be proud of. It’s locally designed and manufactured and now ready for deployment by our local air force.”

The Rooivalk has been undergoing evaluation at the South African Air Force’s (SAAF) test flight and development centre in Bredasdorp, Western Cape, since November 2010.

Kgobe said the development team received positive feedback from ground and flying support crew, and the Rooivalk had no trouble in gaining its military certification.

The craft also served as an incubator for the defence industry, boosting skills and technology, and contributed to job creation. For every Rooivalk-related job at Denel, said Sadik, suppliers benefited from six jobs.

It contributed to a number of innovations too, including the development of better composite materials, and advances in wind-tunnel testing and electro-optical sights.

“It has allowed our country to move away from reliance on imports,” said Sadik. “And the Rooivalk is now contributing to the emergence of the next generation of unmanned vehicles.”

The chief of the air force, Lieutenant-General Carlo Gagiano, received the Rooivalk from Sadik, saying that it represented the best in local skills, technology and manufacturing that South Africa could offer.

The SAAF now has five fully operational Rooivalk craft in its 16 Squadron, based in Bloemfontein, Free State province. Another six will follow later in 2011 – these are currently undergoing retrofitting to bring them up to the Mark 1 standard, which includes remanufactured gearbox mounting components and new external fuel tanks to increase the craft’s range.

As well as boosting South Africa’s air capability for combat readiness if required, the Rooivalk can also now be deployed in peace-keeping initiatives across the continent – something South Africa has participated significantly in, in recent years.

“At the request of the UN, the SAAF has played a big role in continental peace-keeping,” said Gagiano, “and the Rooivalk will help us to continue to fulfil that mandate.”

The Mark 1 complies with the so-called Block 1F baseline, which is the international standard required for peace-keeping deployment. Bringing the Rooivalk up to this standard required about 130 modifications per craft and nine on the ground-support equipment. These included the addition of radio navigation equipment; improvements to the accuracy of the cannon and rocket; and a full replacement of the communications management system.

According to Kgobe, this is the first time that a major South African helicopter type received qualification to international design standards.

The Rooivalk also received the globally recognised DEF STAN 00-970 qualification in September 2010. This is a UK defence standard for military helicopters and means that the craft can work with any international military or peace-keeping force.

Denel Aviation arose out of the old Atlas Aircraft Corporation, established in 1965. Atlas Aircraft was absorbed into Denel, the state-owned arms manufacturer that separated from government-supported weapons company Amscor in 1992. Atlas was then renamed Denel Aviation.

Among Denel’s achievements are the G5 towed and the G6 self-driven howitzers, the longest ranged guns in their class in the world.

The Rooivalk programme was established in 1984, and the craft’s first flight was on 11 February 1990 – the same day that former president Nelson Mandela walked free from Victor Verster prison after spending 27 years behind bars.

It was originally conceived as an attack and anti-armour helicopter, one which could take out even a tank. Over the years, however, the security situation in South Africa has eased and the country’s defence force is now engaged mostly in peace-keeping initiatives. The Rooivalk has been adapted accordingly.

“Rooivalk is now a modern, sophisticated, combat support helicopter,” said Sadik, “and is ready to be used by the defence force in any of its potential deployed operations.”

The Rooivalk is a popular participant at air shows around the country and internationally.