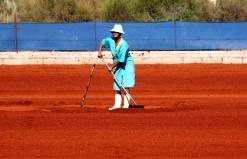 Scientists at Stellenbosch University have
discovered that rooibos is able to reduce
the production of the stress hormone
called cortisol. This may help in preventing
a number of lifestyle diseases.

Rooibos is known to be a beverage that can provide relief after a hard day at work, but although well documented, its soothing effect has not yet been proven scientifically.

Now, researchers from Stellenbosch University have discovered that the South African herbal tea contains compounds that can help to alleviate anxiety and stress.

According to research conducted by a team from the university’s biochemistry department, there are a number of compounds present in rooibos (Afrikaans, meaning “red bush”) that interfere with the production of the stress hormone called cortisol.

The team focused on two compounds, namely aspalathin, which is unique to rooibos, and nothofagin.

Both compounds contribute to the stress-lowering effect tea drinkers usually experience when sipping on rooibos.

Professor Amanda Swart, the research team leader, said rooibos tea extracts and the two compounds were tested in the laboratory on adrenal cells that were stimulated to mimic a stress response similar to that which occurs in humans.

They found that rooibos lowers the production of cortisol in the cells.

She said that studied of the consumption of rooibos in humans and rats have shown that the beverage was able to lower the production of the stress hormone.

Swart added that cortisol is a significant part of human metabolism and plays an important role in the way humans respond to stress.

“Cortisol, which is produced by the adrenal gland, helps regulate fat, protein and carbohydrate metabolism,” she said.

However, she emphasised that a stressful lifestyle can overproduce the steroid hormone and can lead to a number of lifestyle diseases such as hypertension, cardiovascular disease, insulin resistance and type 2 diabetes.

She said research over the past decade had proven that the herb can help prevent cancer, protect liver against disease, boost immune systems, delay ageing, relieve allergies and treat digestive disorders.

Despite all its benefits, Joubert is adamant that the herb should not be seen as a substitute for medicine. “We do not want to position rooibos as a medicine but rather, with its curative properties, as part of a healthy lifestyle,” she said.

For rooibos to be effective, researchers recommend that six cups of tea be drunk throughout the day.

Joubert does admit that not everyone is able to drink six cups a day, and presented alternative ways of consuming it. “It works well in meat dishes, in potjiekos, as a marinade, in fruit juice and even in porridge,” she said.

The South African Rooibos Council is an industry organisation, funded by contributions from farmers. All monies collected are then used for research, to which the council contributes R3-million (US$373 000) a year.

Joubert said that though the organisation funds researchers, the council does not influence their work and their findings. Instead, scientists are encouraged to conduct studies with the assurance that they can work independently.

The council has also recently funded two Agricultural Research Council projects; the first of which investigates ways of controlling pests and diseases that attack the rooibos plant by using biological control agents instead of chemicals; and the second which aims to profile the chemical composition and sensory qualities of rooibos, specifically looking at the antioxidants and flavour.

It has also contributed towards an in-depth microbiological study of all the steps in rooibos production to help farmers and processors deliver a high-quality product.

Joubert said that scientists from Italy and Japan have also investigated the plant’s properties because of its health benefits.

Rooibos does not grow anywhere else in the world except in the remote Cederberg region of the Western Cape province.

“There is a specific combination of environmental factors that aid in its growth. The soil is also different, as the plant prefers to grow in a poor and sandy soil,” said Joubert.

She said that the plant is also able to capture its own nitrogen, which means it does not need lightning to produce nitrogen for growth.

Rooibos contains no caffeine and is therefore perfect for infants, children, and women who are pregnant or breastfeeding. It is also used in a wide-range of cosmetics, skin care and hair products.

There are approximately 450 farmers and 4 500 workers that are involved in the production of rooibos.

According to the council, it is the only segment of the local tea industry that is growing, making up almost 24% of the market’s sales. This translates to roughly R450-million ($56-million).

Joubert said rooibos has become a popular commodity outside of South Africa with 12 000 tons exported annually. Most of the produce is shipped to Germany, where most of Europe’s tea merchants are based.

History of the herb

According to Joubert, the first evidence of people making tea with rooibos dates back to about 300 years ago. The leaves were bruised with hammers before being left to ferment in heaps and dried in the sun – a process that still exists today, albeit with more advanced tools.

Joubert said rooibos’ popularity grew when the early Dutch settlers harvested it for a profit, presenting it as a cheaper alternative to the expensive black tea that was imported from Europe.

In 1772, botanist Carl Thunberg was the first to document the rooibos plant and the tea brewed from it.

Only in the early 20th century was the plant scientifically studied when nature lover Dr Le Frans Nortier began researching its medicinal and agricultural potential.