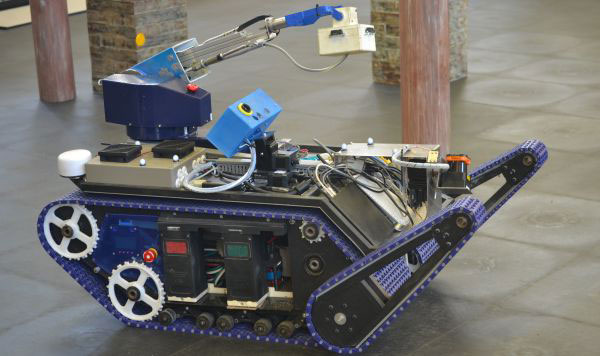 The state-of-the-art mining robot developed by the Council for Scientific and Industrial Research is able to assess mines after blasting, to ensure they are safe for mineworkers to enter. (Image: Shamin Chibba)

The idea of a dozen robots exploring deep in the platinum mines of the North West province to make sure conditions are safe for miners to work is almost out of Isaac Asimov’s Robot novels. But the idea is quickly becoming a reality thanks to a team of South African robotics engineers at the Council for Scientific and Industrial Research (CSIR).

The CSIR’s Mobile Intelligence Autonomous Systems (Mias) group is currently testing robots that can monitor the safety of mines after blasting. This is according to Natasha Govender, Mias’s senior researcher, who hosted a group of journalists from the US, UK and China on Tuesday 25 March at the CSIR offices in Pretoria.

Safety in mines is a big issue in South Africa, and robots, Govender said, present the perfect solution. “When they blast in a mine, people can’t go inside until the air settles. So once it is cleared out, then somebody can go. But they have to check if the hanging walls are safe. At the moment that process is done manually, and that can be very dangerous if the rocks are loose.”

The Mias team built a robot that can go into the mine after blasting and check the hanging walls – so human beings don’t have to risk injury or even death by entering the area.

Ruan de Hart, Mias’s research and development engineer, said most major mining houses, except Anglo American, have not yet considered using robots to assess safety in mines, and may take some time to appreciate the machines’ value. Saving lives was paramount, but the robots would also save the companies millions of rands in work stoppages, and prevent conflict with unions if workers were hurt or killed on the job.

He said the hardware for the prototype was imported from the US and could cost as much as R1.5-million. But if demand for the robots increase, production costs would be lower as robotic capabilities would be transferred to a cheaper platform. “When this goes to market the idea is not to use these components.” Once the software for the prototype was perfected, cheaper components could be used for the hardware, reducing costs to about a third and allowing Mias to produce large quantities locally.

According to Govender, Mias has relied on government funding since it started in 2009, receiving R15-million a year. With its capabilities built up Mias can now generate its own revenue from external projects. They have already secured contracts with Anglo American and Transnet.

The map indicates the amount of ground covered by the search and rescue robot. (Image: Shamin Chibba)

How the robot works

The mine robot is a little like Disney’s WALL-E character. Instead of legs, it has a pair of rotating treads able to move over rough terrain. The bulk of it is made up of a compactor box fitted with a camera, and an arm that can move in seven different directions, or “seven degrees of freedom”.

Mias’s main concern is to program the robot with the intelligence to interact with dynamic human environments and operate without human support. Sensory equipment such as lasers and cameras allows the robot to chart its own path and detect obstacles in its way. If it encounters an obstacle, such as a wall, a chair or even a person, it can move around it and continue on its initial path. “If you want the robot to interact in a human environment it needs to be able to see its environment,” said Govender.

But if the robot needs assistance, an operator is on hand. Operators can see a 3D rendering of the robot’s environment and, by switching the machine to semi-autonomous mode, can set waymarks and manoeuvre it. The image on screen is created through the robot’s 3D localisation and autonomous mappings tools. “We interpret camera and laser information to tell the robot what’s happening in the world,” said Govender. “If you are a robot, how do you decide where I am in a specific environment and how do I localise myself in a specific map? It’s all about where I am in relation to a 3D map.”

The robot is also programmed for path planning with orientation, autonomous stairway detection with movability, and cooperation between multiple robots. It can also be controlled with a tablet computer. Govender said they would soon add gas sensors to the machine to detect the breathability of the air after blasting. 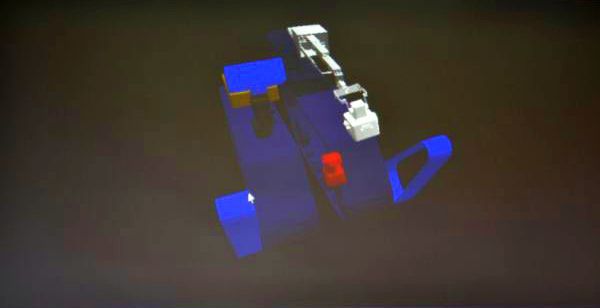 A 3D rendering of the mining robot. The robot’s environment is interpreted by using information taken from the camera, laser and 3D localisation technology. (Image: Shamin Chibba)

Other than the mining robot, Mias is also working on search and rescue robots, and “mule” robots, unmanned machines that can carry equipment. The mule is able to move around any environment using GPS waymarks or by following a person to a specific point. “It will be able to pick up an image on the back of a shirt and follow the person as he or she walks.” said Govender. “It will then drop off medical supplies or pick up injured people and return to its original point.”

The team is currently refining Activision, a program that makes the robot able to recognise a specific object in an environment. Before, for a robot to understand what it was seeing, it would have had to take up to 360 degrees’ worth of pictures. But with Activision it would only need to take two pictures. “We’re actually doing a lot of work in terms of how you actually look for the information to perform a specific task,” said Govender.

She illustrated this point with a toaster. If the pictures are taken of the side where the toaster’s handle and heat switch is, the robot will be able to identify it. But from any other angle, it will struggle to determine the object as there are no indicators.

The Mias team are also working on improving detection and tracking for Activision by using multiple cameras to track many people. “This will be able to decide when to change the focus from one camera to the other to actually keep track of multiple people while still paying attention to the background,” said Govender.

Because Mias is a small group – it has just 22 on its team – it is important for them to collaborate with universities in South Africa and overseas, according to Govender. Researchers wanting to complete their PhDs are allowed to study abroad, particularly at the University of Edinburgh and ETH Zurich in Switzerland. “We have a lot of international PhDs. The idea is we would bring those skills back to South Africa and we would then supervise these students within the robotics field,” she said.

Mias also has exchange programmes with the University of Zurich, ETH’s Computer Vision Lab and the Pasteur Institute in Paris. “We’re trying to make use of all these programmes to improve the skills of the people within our group as quickly as possible.”

Expertise at Mias is in for another boost, with the Department of Science and Technology’s recent announcement of R10.5-million in scholarship funds for postgraduate students looking to complete their master’s degrees and PhDs in the robotics field.