The Council for Scientific and Industrial Research and the Southern Ocean Carbon and Climate Observatory are using robotic gliders to track what happens in the ocean. Their work will help with research, which could contribute positively to responding to climate change and the “blue” economy. 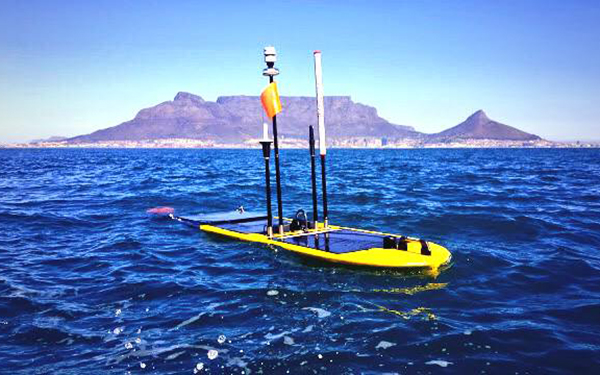 A robotic glider gathers data in the Southern Ocean off the coast of Cape Town. (Image: SOCCO gliders, Twitter)

• How much do you know about the ocean?
• South Africa moves to unlock ‘blue economy’
• Gallery: Celebrate Marine Month in South Africa
• Plans to tap into South Africa’s oceans on track

Robotic gliders, looking much like a combination of a surf board and a missile with solar panels, are helping South African researchers learn more about the ocean.

The gliders help to gather important data for research and development.

Speaking to Munyaradzi Makoni writing for the science and technology news website, SciDev.Net, Sebastiaan Swart, a principal scientist with the Council for Scientific and Industrial Research (CSIR) said: “These cutting-edge robotic gliders will shape the future of marine research and environmental monitoring of the Southern Ocean and South African waters.”

The CSIR and the Southern Ocean Carbon and Climate Observatory (SOCCO) are using the gliders to track what happens in the ocean.

They examine behaviour such as the impact of carbon dioxide and the increase of phytoplankton, a microscopic algae living on the ocean surface.

The gilders also help the scientists to understand how circular currents of water, or eddies as they are called, move nutrients to the ocean surface. The effects of these on the Southern Ocean and changing climate patterns, however, are not yet fully understood.

This is of great concern to Swart because he said creatures living in the ocean were vulnerable to even the smallest of changes in the environment.

“One [of our] research gaps that we hope to address with these gliders, in conjunction with satellites and computer models, is better understanding the role of small-scale features such as ocean eddies and currents and short term events [storms] on the overall state of the ocean,” said Swart.

Little is known about the Southern, or Antarctic, Ocean. Simply sailing in it for longer periods is not enough for scientists to unravel its mysteries, such as the diverse life species it supports. Swart said investigations done from research ships and data from satellites exclusively was not sufficient.

The #Seagliders being tested for their next #scientific mission on a sunny winter’s morning in #CapeTown. pic.twitter.com/vLQim7FvJM

The first gliders were deployed in September 2012, according to SciDev.net, near Gough Island, some 2 000 kilometres south-west of Cape Town.

For six months, the robots collected data that was sent back to CSIR scientists. The location and depth of the bots were controlled remotely through satellite communication. Since then, there has been no looking back and “additional long-endurance robotics experiments have taken place on an annual basis”, reads SciDev.

Swart said that if it was understood now how the Southern Ocean worked and interacted with the environment, the better the chances would be to lessen the effects of climate change.

There are nine gliders in the fleet, which could increase depending on the need for further research. “Four surface wave gliders ride the ocean surface measuring CO2, acidity, among other surface ocean physical variables,” wrote Makoni. “Five profiling gliders can dive to a maximum depth of one kilometre below the ocean surface.”

South Africa’s oceans already contribute R54-billion (about US$3.2-million) to the country’s economy, and Swart is optimistic that glider research missions will be able to increase this sum.

They may also contribute to ocean governance and resource development for Operation Phakisa, South Africa’s programme launched in 2014 to reap the maximum benefit from the ocean while minimising any harm.

“Gliders are a key part of unlocking the wealth of our ocean blue economy,” Swart said. “They can assist in understanding the ocean, protecting and managing its resources, and manage disasters and pollution.”

All in one photo: one of our #Robots, a #Whale and the lovely #CapeTown! pic.twitter.com/CLL9eXfyRZ