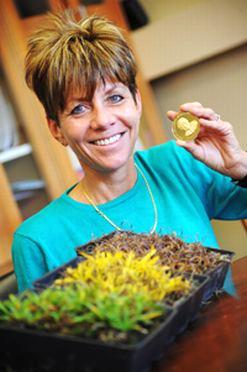 Prof Jill Farrant with the gold medal that
came with her Harry Oppenheimer
Fellowship Award.
(Image: University of Cape Town)

South African researcher Jill Farrant has been honoured as one of five exceptional women scientists in the 2012 L’Oréal-Unesco Awards in Life Sciences.

Farrant was selected from hundreds of nominations, becoming the African/Arab laureate for her research into drought-tolerant plants.

She is a leading scientist in the field of plant responses to drought stress and her achievement highlights the many contributions of South Africa’s scientific community to international research.

A worldwide network of nearly 1 000 scientists nominates the candidates for each year’s awards. The five laureates, each from a different global region, are then selected by an independent international panel, headed by Prof Günter Blobel, who received the Nobel Prize for Medicine in 1999.

Farrant’s work to develop plants that can survive in drought conditions is important as countries, governments and industries continue to look for ways to deal with the impacts of climate change.

If scientists have a better understanding of drought tolerance in plants, they could identify genes that could be used to improve the same characteristics in crops.

Farrant is the research chair of plant molecular physiology at the Department of Molecular and Cell Biology at the University of Cape Town (UCT).

“The research is topical today in the face of food scarcity in Africa and the impending effects of climate change,” she says.

The beginnings of Farrant’s interest in developing drought-tolerant plants started when she discovered what is known as a resurrection plant on her family farm in Limpopo. The plant seemed dead, but the next day, after a rainstorm, the young Farrant noticed that it had revived.

She was only nine years old at the time and she still has a diary entry to verify the find.

Resurrection plants can tolerate extreme water loss – up to 95% – without dying. They belong to a group of plants called lycopods and have the ability to use cellular mechanisms to come back to life after periods of extreme dryness.

“They are ideal models to understand how plants cope with extreme droughts and from this I have learnt to understand the protection mechanisms required to survive such stress,” she says.

It wasn’t until Farrant was a postdoctoral researcher in 1994 that she decided to make resurrection plants the focus of her research.

Farrant had long forgotten about the plant she discovered many years ago, but then she read an article about resurrection plants published in 1971, a year after she noted the phenomenon for the first time.

Don Gaff, an Australian researcher who wrote the article, came to Africa to conduct experiments by watering numerous plant species in the field to observe if they resurrected or not.

“I went back to the farm and found the very plants I had noted as a child and started testing the phenomenon,” she says. “I started the research that could help us explain why they are able to withstand such drought.”

Farrant’s goal is to find a solution to food security in Africa. Her main focus is working on crops that are staple food items in Africa, such as maize, as this plant is the most advanced in terms of being drought tolerant.

“The plants I work on have the ability to resist water loss at the start of a drought, but they can no longer do this when the drought is extended, and thus die,” she says.

Farrant is looking for ways to overcome this challenge by developing plants that are able to at first resist water loss and then tolerate it without dying.

She intends to produce a crop that can survive at least three months without rain.

While these plants at first might not have great yields in terms of seed, the aim is to produce enough to feed a subsistence farmer and his family, with some seed left over to plant again the following season.

Without additional funding, Farrant believes she may be up to ten years away from developing drought-tolerant crops. With funding, it could take as little as five years.

The L’Oréal-Unesco Award is the latest in a series of honours for Farrant. She is also the first woman in life sciences at UCT to receive an A-rating from the National Research Foundation (NRF).

The NRF makes use of six rating categories to assess the standing of applicants amongst their peers.

She is a past recipient of the Harry Oppenheimer Memorial Trust Fellowship Award and won the Distinguished Woman in Science award from the Department of Science and Technology in 2010.

In 2007 she was awarded the position of research chair of plant physiology and molecular biology. She currently serves as the President of the South African Association of Botanists.

Farrant also wants to set up an annual award to encourage future science research in South Africa. She plans to spend some of her $100 000 (R807 000) prize money to establish the award.

The L’Oréal-Unesco Awards ceremony will take place on 22 March at the Unesco Headquarters in Paris.