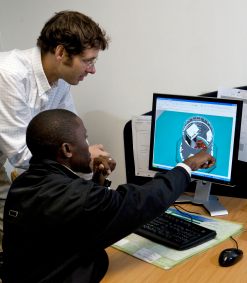 The Department of Science and Technology (DCT) has allocated US$6.2-million (R50-million) to fund new research chairs, or research professorships, in during the 2010/11 financial year.

Making the announcement in August 2009, Science and Technology Minister Naledi Pandor named 10 new research chairs, adding that there are plans to appoint nine more this year.

The appointments fall under the South African Research Chairs Initiative (SARChI), a key part of government’s strategy to strengthen the human resource pool in scientific research.

The programme is administered by the National Research Foundation (NRF), the national governmental agency tasked with the promotion and support of basic and applied research, as well as innovation.

SARChI, an important component of the NRF’s strategic plan up to 2015, aims to boost the country’s competitiveness in the international knowledge economy, by cultivating both existing and potential strengths.

The initiative’s ultimate goal is the creation of 210 new chairs by 2010.

Chairs are awarded in one of two tiers. A Tier 1 chair is given to those outstanding academics with exceptional research and student supervision records, and who work to continually improve their performance.

A Tier 2 chair is given to emerging researchers who show the potential for rapid development and who also have excellent research and student supervision records.

“Our investment will build a larger base of scientific expertise than currently exists, thus enhancing ’s international reputation in research and innovation,” said Pandor. “This, in the long run, will help create jobs, increase economic growth and improve our standard of living.”

The SARChI initiative is already in its third round. The previous two rounds saw the establishment of 72 new chairs – 21 in 2007 and 51 in 2008. Research subjects range from health and wealth in , and cancer biology, to fundamental physics and string theory, vaccine-preventable diseases, and economic development.

Pandor announced the names of the 10 new appointees before mentioning that another five chairs will be appointed in astronomy, as well as a further four in mathematics.

The astronomy chairs are expected to strengthen ’s bid to host the world’s largest telescope, the Square Kilometre Array (Ska), and will attract top class astronomers and engineers to work on Ska and other programmes.

The minister named some interesting features regarding the 10 new chairs. Most of them, she said, were in the human and social sciences in the fields of development planning and modelling, development economics, and social change, as well as econometric modelling, statistics, indigenous knowledge systems, and mathematics education.

Two of the 10 were supported by the private sector in the form of financial institutions Rand Merchant Bank and the FirstRand Foundation, with a view to encouraging research and development in maths education. Two of the 10 are to be appointed at previously disadvantaged institutions, and one goes to a South African woman currently based in the .

The 10 new professors will assume their duties during the remainder of 2009 or at the start of the 2010 academic year.

The NRF has named a number of key objectives for SARChI. Top of the list is an increase in the number of world-class South African researchers.

The second objective is to retain or lure top research scientists to the higher education sector. This will help to reverse the decline in research output, capacity and focus at government-funded research and higher education institutions, and science councils.

SARChI will also strengthen the capacity of research and higher education institutions, science councils, museums, and other research facilities, such as teaching hospitals, in order to boost the generation of new knowledge.

Thirdly, the programme will stimulate strategic research in all fields, resulting in greater levels of excellence in research areas of both national and international importance.

Another important function is the creation of research careers for deserving young and mid-career researchers, while at the time addressing racial, gender and age imbalances. Finally, the programme aims to accelerate the training of top researchers.