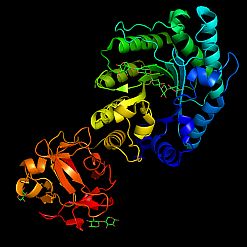 Nokuthula Mchunu-Nxumalo has
discovered that a certain fungus
can be used to create a xylanase
enzyme (pictured) which bleaches
paper, thus eliminating the use of
harmful chlorine in the food and
paper industries.
(Image: Naro Food Research Institute) 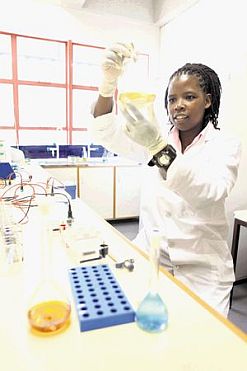 Mchunu-Nxumalo is a doctoral
student at the Durban
University of Technology (DUT).
(Image: DUT)

A South African microbiologist has discovered that a certain fungus can be used to create a xylanase enzyme which bleaches paper, thus eliminating the use of harmful chlorine in the food and paper industries.

Nokuthula Mchunu-Nxumalo, a doctoral student at the Durban University of Technology (DUT), made the discovery during an 18-month study with academics at the University of Sains Malaysia’s (USM) Centre for Chemical Biology and the DUT.

The work, which forms part of Mchunu-Nxumalo’s doctoral thesis, is a partnership between DUT’s biotechnology and food technology department and USM.

Professor Suren Singh, head of biotechnology and food technology at the DUT, said: “Mchunu has spent close to a year at the Malay university and has made excellent progress in completing the sequencing of an industrially important thermophilic fungal genome, a world first.”

Singh said the research finding was a milestone for the DUT.

Through her work, Mchunu-Nxumalo has discovered more than 200 enzymes responsible for plant and waste degradation – which could also help in the production of renewable fuels.

“South Africa has a lot of agricultural waste from growing maize, rice and sugarcane … the proteins can actually convert plant waste into biofuel,” she said.

Mchunu-Nxumalo’s ground-breaking research in the sequencing of a thermophilic genome has been co-supervised by Profs Kugen Permaul and Maqsudul Alam from USM’s Centre for Chemical Biology.

According to DUT’s Prof Singh, genomic sequencing refers to a combination of lab experiments and computer processing that elucidates the entire DNA sequence of a living organism.

“Sequencing of the human genome is one of man’s greatest scientific accomplishments, taking approximately 12 years since 1989 to produce a draft version,” he said.

“To this day, it is only approximately 90% complete and this is due, in part, to the large amount of DNA we possess and also since about 8% contains repetitive sequences that contain no genes.”

The research by Mchunu-Nxumalo concentrated on a smaller genome from a thermophilic fungus, which prefers high temperatures of up to 60°C. This is vital for heat-intensive industrial processes.

Professor Permaul said: “Mchunu’s research shows that there is a greater than 90% match between the genome and transcriptome (codes for real genes), demonstrating the high quality of the data produced by the high throughput genome sequencing.

“The identified genes will be used to mass-produce enzymes that will be useful in industrial applications and processes.”

Mchunu-Nxumalo grew up in Port St John’s in the Eastern Cape, but now lives in Port Shepstone on KwaZulu-Natal’s south coast.

She lectures undergraduates at DUT’s department of biotechnology and food technology.

Once she returns from Malaysia, Mchunu-Nxumalo will join Singh and Permaul in studying the DNA sequencing of indigenous plants.

Permaul said: “Mchunu intends producing at least two scientific articles from the results of her project as well as file patents for genes that produce enzymes of industrial importance.”

Mchunu-Nxumalo also took part in a bilateral research project between DUT and Sweden’s Lund University as part of her master’s study.

With DUT’s department of biotechnology and food technology investing R20-million (US$2.8-million) in upgrading its state-of-the-art equipment and facilities, Singh believes they will be able to extend ground-breaking research beyond 2011.

Representatives from USM and DUT met on 26 August 2011 at the DUT’s Hotel School Conference Centre and signed a memorandum of understanding to establish future research prospects.