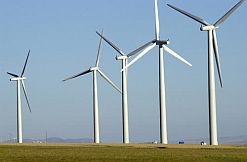 South Africa will soon be leading the
continent in green energy, with 28
independent wind farms and solar
power projects now on the drawing
board and national electricity supplier
Eskom coming to the party.
(Image: Flickr)

The majority of South Africa’s new renewable energy projects will be located in the greater Cape area with its abundant potential to tap into sun and wind energy.

Of the 28 independent power producers of wind and solar energy who were successful in the first bidding process of the Department of Energy, 24 will be located in South Africa’s Northern, Eastern and Western Cape. The other four projects are earmarked for the Free State (1), the North-West (1) and two in Limpopo.

The first preferred bidders for the Renewable Energy Independent Power Producers programme (IPP) were announced by the Minister of Energy, Dipuo Peters, on 7 December.

The announcement was made during COP17, the 17th Conference of the Parties to the United Nations Framework Convention on Climate Change (UNFCCC) held in Durban over November and December. COP 17 was hailed as successful after developed and developing countries committed to a new legally binding deal to reduce emissions, with a date set for 2015.

With the new green projects a total of 1415 MW clean energy could become available for South Africa’s growing energy demands by no later than 2016.

The IPP programme has a further 2 209MW in renewable projects available in the second window of allocations which will be concluded in March 2012. The South African government has set itself an overall target of 3725 MW of energy generated from large-scale green technology by 2025.

Chosen out of a total group of 53 applicants, the successful bidders were evaluated on six factors and had to pass all six to go onto the next phase. Environmental, land, commercial legal, economic development, financial and technical factors were considered by a panel of international and local experts.

But the process is by no means over and these 28 preferred bidders could still fall by the wayside with the next deadline looming. It is now up to them to successfully conclude their project arrangements, which include submitting completed environmental impact assessments for the financial close deadline of 30 June 2012.

Construction of the actual projects will only commence thereafter but all projects have to be operational by 2016, at the latest.

The department also plans to launch another programme for smaller projects of less than 5 MW. “This programme will benefit mainly small projects requiring limited capital and the qualification requirements will be less demanding on the developers,” the department has confirmed. An allocation of 100 MW has been set aside for the small-scale projects with the allocations process starting early in 2012.

The majority of the projects in the first batch of allocations aim to tap into the abundant sun energy available in South Africa with 18 photo-voltaic solar projects and two concentrating solar power projects scheduled to commence during the latter part of next year. This will bring in a total of 781 MW of solar energy to the power grid.

The bid process also awarded eight new wind energy projects for South Africa. Not surprisingly, the Eastern Cape, notorious for its extremely windy conditions, will see the erection of five new wind farms in the very near future: this at Oyster Bay, Van Stadens and Jeffreysbay on the coast and two inland at Cookhouse and Molteno.

Another two wind farms will be located in the Western Cape – at Dassiesklip and Hopefield and one will be erected at Noblesfontein in the Northern Cape.

The first phase wind projects will on completion add a combined total of 634 MW of wind energy, with the 135 MW Cookhouse farm and the 133 MW Jeffreysbay farm the two biggest.

Outside of the bidding process, national power supplier Eskom has confirmed that it is going ahead with the construction of the Sere wind farm in Vredendal, set for completion by the end of 2013 with a 1.5 MW capacity.

South Africa’s first successful wind farm, located at Darling, started operating in 2008 and produces about 5.2 MW. Peters recently launched the South African wind energy awareness campaign, “Powered by Wind”, with Danish Minister for Climate, Energy and Building Martin Lidegaard. The campaign is focussing on creating awareness around wind energy and will be rolled out in 2012. As part of the project the International Energy Agency will assist in drawing up a resource map and establishing a wind atlas for Africa.

Opening up the energy mix

For its part, the IPP programme stems from government’s desire to broaden the energy mix of the country. In May this year the Department of Energy promulgated the 2010 Integrated Resource Plan (IRP), the country’s blueprint on the energy mix for the power sector in the period running up to 2030.

A critical part of the IRP is to bring private green energy producers into the fold, with the IPP programme aimed at doing just that and the bidding process forming part of this.

At the moment state-owned Eskom is South Africa’s dominant supplier of coal-based energy, providing over 90% of the country’s energy needs. South Africa has just one nuclear plant, at Koeberg.

With global sentiment moving ever more strongly towards renewable energy, the South African government has set out its green technology interventions through the New Growth Path framework. At the same time its Response on Climate Change white paper sets out its vision for an effective climate change response going into the future. The white paper has a long-term plan to change the reliance of the country’s economy from coal-based energy to more renewable energy sources.

The white paper confirms that South Africa is a significant contributor to greenhouse gas emissions as a result of its coal-based economy, as compared to that of other developing countries in Africa. The latest Greenhouse Gas Inventory (base year 2000) found that electricity generation contributed just under 40% of total emissions, while industrial process emissions constituted around 14% of total emissions in the country.

“At COP15 in Copenhagen, we announced our commitment to reduce carbon emissions by 34% in 2020 and by 42% in 2025, with support from developed countries with regards to finance, technology and capacity-building,” he confirmed to delegates at the opening.

Leading up to COP17, a landmark Green Economy Accord was signed between government, trade unions, the community constituency and the business community in which everyone committed to a greener economy for South Africa. In the process, the partners envisage creating 300 000 green jobs by 2020 and promoting conditions for the poor in particular.