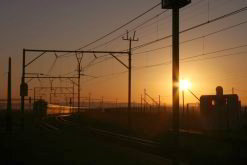 Metrorail in the Western Cape will be the first commuter rail service provider in the country to use DataDot technology to recover stolen assets and curb an increase in vandalism, which costs the company millions of rands each year.

Metrorail estimates that the direct cost of vandalism in the province in the past year has amounted to R9-million (US$1.1-million). Earlier in 2011, The Cape Times reported that vandalism in the region has caused more than 6 000 train delays this year alone.

Matya said that the knock-on effect of lost productivity, due to commuters arriving late at work, is detrimental to the economy.

Government service BuaNews reports that about 11 000 police officers across the country have been trained to use DataDot technology to track down vandals stealing cables from Metrorail.

DataDot technology is recognised as a highly effective method of preventing theft and improving the likelihood of recovering stolen goods. It also makes it possible to speed up investigations and prosecutions and results in higher conviction rates of rail cable thieves.

The technology tags assets with microscopic discs or microdots that contain unique information about the asset. Each asset’s laser-etched code is stored on a national and global verification database and allows assets to be tracked back to their owners more easily.

Each microdot particle is made of a high-tech polyester or metallic substrate which is between 0.5mm and 1mm in diameter.

The invention is widely used in the investigation, prosecution and successful conviction of car thieves.

According to DataDot Technology South Africa, the dots, which are too small to see with the naked eye, are brushed or sprayed onto assets. Once an item is marked, the dots cannot be removed and can only be detected using ultraviolet light.

DataTrace DNA, which is an invisible marker in the adhesive layer applied to the product, provides further proof of ownership.

Another benefit of the technology is that the unique DataDot code can be read with a simple magnifying device, removing the need for complex forensic investigations.

The rail transport company is optimistic that the technology can safeguard its assets and infrastructure. “It will enable police to confiscate stolen assets, make it very difficult for thieves to sell their stolen wares and reduce the likelihood of crime,” Matya said in a statement.

Theft of cables is Metrorail’s biggest concern; however, other items such as rail clips, track circuits, apparatus cases, copper bond, jumper cables between carriages and signal heads are also sought-after.

The majority of items stolen are only used in the rail industry and not readily available in the open market.

Matya added that the preventative measures will contribute to reducing opportunities to commit crime and reduce the lucrative market for stolen goods. In addition to using DataDot technology, Metrorail will also improve surveillance and security and look into more ways to stop vandalism.

Matya said that regional engineers have developed hardened steel casings to protect track boxes and apparatus cases. They have also developed stronger locks that have already proved to be successful.