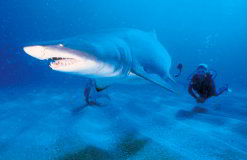 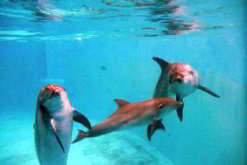 After 19 years of captivity at the Bayworld Oceanarium in Port Elizabeth in the Eastern Cape province, a pair of spotted ragged-tooth sharks was released back into the sea, where they’ll help scientists to make South African seas safer for their species.

According to the Nelson Mandela Metropolitan University, whose Department of Development Studies runs several marine research projects with Bayworld, South Africa is one of the last places anywhere where the ragged-tooth shark population is healthy and stable.

Although a sad day for Bayworld, the release is good news for raggies, as South Africans affectionately refer to the animals.

The pair is now part of a research project where they will be monitored, and will assist researchers in ensuring that South African waters remain one of the world’s few safe havens for their kind.

Because of its array of long, sharp teeth, the ragged-tooth shark (Carcharias taurus) looks fearsome, but is slow-moving and even passive, and generally will only defend itself if provoked. The species is listed as vulnerable on the Red List of the International Union for the Conservation of Nature.

An important marine research and education centre, the Bayworld Oceanarium was built in the 1950s and is currently closed to the public for upgrading and refurbishment. This includes the installation of independent life support systems for each exhibit, and a new penguin enclosure.

In the meantime the oceanarium has relocated almost all of its residents to other facilities.

Other attractions at Bayworld include a snake park, and the Port Elizabeth Museum, South Africa’s third oldest.

Taking the raggies to the open water called for careful handling. The move was coordinated by South African ichthyologist and aquarium specialist, Dr Tony McEwan.

Under his guidance the sharks were prepared for the trip and then transported in oxygenated crates from the aquarium to the north wall in Port Elizabeth’s harbour.

Once the sharks’ holding tank had been drained of 75% of its water, the atmosphere was flooded with oxygen to allow the animals to breathe comfortably. The sharks were then sedated, separated, tagged, and shipped out.

At the harbour, tags in place, the raggies were hoisted off the truck and lowered into their new home, the deep blue sea. They were released at the same spot where they were caught almost two decades ago.

Because they had often caught their own fish while in captivity, the two are expected to thrive in the wild as well.

In July 2009, the aquarium’s two Indian Ocean bottlenose dolphins, Dumisa and Domino, were relocated to the Ocean Park theme park in Hong Kong, as part of a global breeding programme to diversify the species’ gene pool.

In April 2011 Domino became a father through artificial insemination with Angel, one of Ocean Park’s resident females. The sociable animal has since been placed with another female who, it is hoped, will also produce a calf in the near future.

Domino and Dumisa are father and daughter and are therefore too closely related to be allowed to breed as a pair. Because they still belong to Bayworld, the facility will be eligible to receive offspring of either of the dolphins.