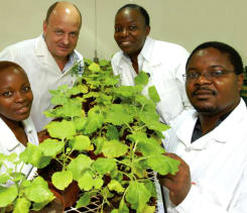 
Researchers from South Africa’s Council for Scientific and Industrial Research (CSIR) have developed the world’s first injectable medicine from a tobacco plant – an antidote for rabies which could change the way the deadly viral disease is treated worldwide.

The new liquid antidote, RabiVir, is made from the leaves of the Nicotiana benthamiana plant, a cousin of the commercial cigarette tobacco plant Nicotiana tabacum. Through genetic engineering, antibodies known to work against rabies were introduced to the N. benthamiana tobacco variety.

The product is a collaborative effort of CSIR scientists, the World Health Organisation (WHO), Kentucky Bioprocessing and MAPP Biopharmaceuticals.

Dr Ereck Chakauya, senior scientist and research group leader of the CSIR Biosciences plant expression group, says the liquid antidote is a breakthrough in the treatment of rabies.

The product is not only much cheaper to manufacture, but potentially far more effective than current treatments.

“This product is a liquid cocktail that attacks the virus more effectively by targeting two different regions on the virus,” he explains, adding that RabiVir reduces the risk of resistance to treatment. “When you expose a virus to drugs, after a while it can become tolerant to it, and the new vaccine reduces this.”

Chakauya says the liquid antidote is ideal for treating victims of dog bites, particularly in developing countries. Rabies is a viral disease that is transmitted through the bite of rabid animals, most often dogs.

According to WHO statistics about 95% of human rabies deaths occur in Asia and Africa.

“Deaths caused by rabies are vastly underestimated, especially since developing countries often have stray dog overpopulation,” he says. “By my approximation there are about nine-million dogs in South Africa, and some researchers say there may be up to 2 000 bites per day.”

Many of the victims are children.

If victims aren’t treated soon after a bite, before flu-like symptoms such as fever, headache and tiredness start showing, the disease is fatal. Many deaths also go unnoticed because rabies is often mistaken for cerebral malaria.

Recently high profile rabies cases have helped to bring the disease into the public eye, but more awareness and better treatment solutions are needed to save lives.

RabiVir is an alternative to the antibody component of existing post-exposure treatment.

When someone is bitten by a rabid dog, what follows is a lengthy treatment process which first involves taking a cocktail of antibodies, followed by a vaccine.

However, the problem lies with the antibody treatment as it is produced from human blood.

In developing countries not enough human blood is donated to make the antibodies, and the blood that is available is prioritised for life-saving transfusions.

Some countries in Africa and Asia use horse blood to manufacture antibodies, but this can cause allergic reactions.

Chakauya explains that the manufacturing process is very cumbersome, which adds to the cost of the product.

“All blood donated first needs a complete viral clearance for HIV and hepatitis B,” he says.

The tobacco alternative can significantly reduce the cost of the antibody component to just R200 (US$23), and still be profitable to make.

Chakauya explains the antibody dosage is determined by a person’s weight, and an average adult male would need about five doses of 2ml each, which would cost about R3 000 ($339).

Then, a patient has to receive four injections of the vaccine, and each jab costs about R300 ($34).

“Instead of an expensive blood-based antibody, RabiVir could replace this, and treat rabies at the same level or even better,” he explains.

All their tests so far have confirmed how well the liquid vaccine works. Locally, the product was tested on animals and found to be successful, and two international tests also confirmed these results.

Chakauya says the next phase of the project involves testing the vaccine on humans. “This part of the project will be complex, but it is more risky,” he says.

As this is also the first product of its kind worldwide, regulatory procedures are also more complicated.

“There are examples of oral medication from plants, but not the injectable kind which makes it an entire new area to regulate,” he explains.

If the vaccine is approved by the US Food and Drug Administration and the WHO, it can be used in other countries too. “Many countries still use very old technologies and this is a major new approach.”

Other applications for human and animal health

Chakauya says the uses for tobacco in medicine doesn’t end with rabies, the technology can also be applied to other areas of human and animal health.

He is already working on using tobacco to develop vaccines for important animal diseases such as African horse sickness; pulpy kidney, a bacterial disease affecting young sheep and goats; and blue tongue, a viral disease in cattle.

There are also applications for tobacco in the treatment of HIV and diabetes.

“This is good technology. It will make a huge difference to healthcare.” 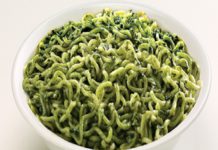