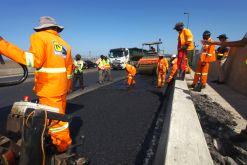 High-modulus asphalt technology is now
being considered for use in routine road
design and construction in South Africa.
(Image: CSIR) 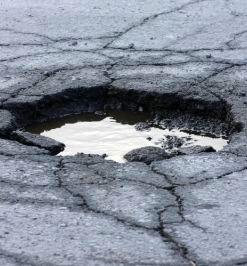 If HiMA technology is implemented
nationally, it could mean the end of
potholes on local roads.
(Image: assist247.co.za)

South Africa’s Council for Scientific and Industrial Research (CSIR) has successfully piloted new road technology, specifically designed to improve the lifespan of roads that carry heavy traffic. If the technology is implemented nationally, it could mean the end of potholes on local roads.

Economic growth, higher traffic volumes and higher axle loads are some of the factors that have made it necessary to review how South Africa’s roads are built and maintained.

South Africa has a well developed and extensive road network of about 754 000 kilometres, of which over 70 000km are paved or surfaced roads.

High-modulus asphalt (HiMA) technology, which can be used on main routes, high-volume urban roads and at airports, is now being considered for use in routine road design and construction in South Africa.

HiMA could become a cost effective, innovative solution to help meet the increased demands placed on the country’s road infrastructure.

HiMA is the South African name for an asphalt material type originally developed in France in the early 1990s. In France, the technology is now used extensively on main routes, airports and urban roads.

It is a composite material consisting of graded mineral aggregate blended with a hard bituminous binder.

It has improved resistance against permanent deformation and due to its high stiffness, provides better protection of underlying road layers. Its high binder content also makes it more durable.

A research project was established to investigate the feasibility of HiMA technology as a solution to sustainable road maintenance in the country.

It is a joint initiative of the CSIR and the Southern African Bitumen Association (Sabita).

At the request of Sabita, the CSIR was asked to develop South African specifications for the design of HiMA mixes, using local components such as aggregate (crushed rock) and bitumen.

Bitumen is a binder used for asphalt and is derived from crude oil at refineries, together with other products such as fuel.

The eThekwini municipality in Durban is the first road authority to implement the use of HiMA technology on a section of road at the entrance to the Durban harbour.

This road was the ideal trial site for HiMA technology as it’s a major access route to the harbour, and always in need of frequent maintenance. Paving of the HiMA layers on the road was completed in September last year.

The base layers were constructed using cost-effective road materials technology with improved performance to cater for the extreme volumes of heavy vehicles entering and leaving the harbour.

One of the HiMA mix designs used at the Durban harbour contained 20% reclaimed asphalt and could carry much higher traffic loads than traditional mixes.

The trial yielded positive results and eThekwini is looking to implement HiMA technology more widely within its municipal region.

Krishna Naidoo, senior manager of eThekwini’s road rehabilitation branch, says that the municipality is impressed with the results.

“We believe that HiMA offers a better solution, taking into account the challenges posed by the weather and high volumes of heavy, slow-moving traffic around the Durban harbour,” Naidoo says. “Any interruption of traffic in that area affects the national economy.”

“The use of this technology in road construction leads to roads that last longer and need less maintenance, thus causing fewer delays for road users,” explains the CSIR’s Dr Erik Denneman, who also heads up the longer-life roads project.

HiMA also decreases the life-cycle costs of roads, increases sustainability and decreases the use of non-renewable materials such as aggregate and bitumen.

Denneman says that HiMA is suitable for use in both new road construction projects and upgrading of existing roads.

“Roads lose strength over time due to traffic loads and this is why they need to be rehabilitated periodically,” he says.

He adds that HiMA can also be used to build ‘perpetual roads’. This is an innovative concept where roads are constructed to have a very high carrying capacity, using thick layers of high quality material.

Although this will cost more initially, in the long term the road would last longer and require less maintenance to the structural layer. Only the top layer would have to be replaced periodically.

“Over the life of the road, this will reduce road user delays considerably and increase the sustainable use of resources,” he says.

The durability of roads also depends on other factors such as the weather.

“As South Africa has a hot climate, it is important that the asphalt remains stable at high temperatures,” he says. On a hot day, the surface temperature of roads in South Africa can reach 60°C.

Asphalt is a visco-elastic material, which means that its stiffness decreases at higher temperatures.

“One of the advantages of HiMA technology is that it has a stiffness at high temperatures that is significantly higher than that of conventional asphalt.”

The CSIR and Sabita have developed preliminary guidelines for the design of South African HiMA mixes and roads containing HiMA layers.

The guidelines will be incorporated into the updated, comprehensive South African Road Design Method undertaken by the CSIR and other organisations for the South African National Roads Agency.