Cape Town’s Polaris climate change centre
will be shaped like a giant iceberg. 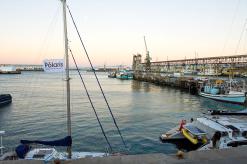 The Collier jetty in Cape Town harbour,
where the Polaris will be built.
(Images: International Polar Foundation)

Already known for its progressive green philosophy, Cape Town is about to score another coup by hosting the world’s first interactive climate change centre, a project driven by the Brussels-based International Polar Foundation (IPF).

The centre was launched in December 2011 at the V&A Waterfront, where it will be built on the Collier jetty.

Among the dignitaries present at the ceremony were Prince Albert II of Monaco and his wife, Princess Charlene; Michel de Wouters, IPF South Africa’s executive secretary; and Nighat Amin, the IPF’s vice president.

Known as the Polaris Climate Change Observatory (PCCO), the centre is scheduled to open in 2014.

“Without a protected planet and without an environment sheltered from the violence of a disrupted climate, our entire vision of the future is called into question,” said Albert, who is involved with the IPF as well as projects run by his own environment-focused foundation.

He then stressed that the project needs the help of the private sector to thrive.

“They are essential partners; essential for their financial support, of course, but also for their capacity for rallying large numbers of people.”

“You cannot protect the environment unless you empower people, you inform them, and you help them understand that these resources are their own, that they must protect them.”

The multi-level PCCO will resemble an iceberg in a large pool of water and visitors, as they go along, will learn about Earth’s history as far back as 800 000 years.

After crossing the water and entering the iceberg, which has an overall floor area of 3 000 square metres, visitors will see a large globe, 15 metres across, in the atrium. This will be the central point of the PCCO, not only to remind visitors what is at stake but also to serve as a 3D screen to explain phenomena such as weather patterns.

Near the globe, a giant ice core – a sample of ice sheet, drilled deep enough to show all the layers of snow accumulated over thousands of years – will support a transparent spiral staircase.

Other features and exhibitions will include Ante Hominem and Advent of Mankind (climate history); Dance of the Planets (natural climate variations); the Blue Planet observatory (inside the globe); The Carbon Age (man-made climate); and Domus in Terra (solutions for climate change mitigation).

This will be the basic model for future Polaris centres, but it can easily be adapted to different sites. The second one will be built in Brussels.

Educating the public about climate change

Despite regular meetings, conferences, symposiums, lectures and discussions on the topic of global warming, solutions are slow to arise.

With challenges growing in number, including the effect of climate change on sea temperatures, polar animal populations and the global weather, the world’s leaders and its citizens are working hard to save the situation.

But it is not all bad news – scientists agree that the damage can be halted, and even reversed in time. However, this will not happen if people remain uneducated about their impact on the environment and the danger into which they are putting the world.

And this is the aim of the PCCO – to educate visitors, through temporary and permanent exhibitions, as well as education and outreach activities, about the consequences of climate change and the helping role that everyone can play.