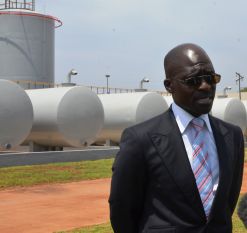 Following winning a five-year contract to supply three Eskom clusters with fuel, Econ Oil saw a chance to strengthen its foothold in the industry with the new blending plant.

The company had already been supplying a number of Mpumalanga province power stations with 16-million litres of fuel on a monthly basis and had created more than 30 permanent jobs.

The new plant will strengthen its position as a fuel supplier, supplying one of South Africa’s oldest operating power stations, Hendrina, in Mpumalanga, during the last third of this year.

The Econ Oil plant, being the first of its kind, may pave the way for other oil companies and corporations alike to invest in empowering female stakeholders to help rectify the corporate power imbalance in the country. The Alberton-based oil company’s expansion is one of the Eskom group’s success stories in its move to transform the industry to be fully representative of South Africa’s population.

“Since government adopted economic transformation policy, South Africa has seen a change in the structure of the economy and this can be measured through African and black participation in various sectors of the economy,” Gigaba said, commenting on government’s role in transforming the country’s economy.

“The constraints imposed by the industry’s failure to commit to transformation and the financial sector’s unwillingness to support many black entrepreneurs have not deterred the growth of the company,” Gigaba said, adding that “Econ-Oil has experienced these market failures and black women showed resilience, true entrepreneurial spirit to establish this company against all odds.”

Econ Oil is a direct beneficiary of the Department of Public Enterprises’ transformation policies, which have helped a small business to succeed in an industry dominated by international oil companies.

The Liquid Fuel and Petroleum Charter was revised in 2000 to stipulate that South African oil companies should aim for 25% black ownership as soon as possible; to date the majority of oil companies operating in South Africa have yet to achieve this goal, with just a 48% compliance rate.

Former Minister of Energy Dipuo Peters – who currently serves as the minister of transport – has expressed her disappointment in the figure, saying that; “on ownership, the finding concludes that the average effective narrow-based black shareholding is 18,9%, instead of the [requisite]25%”.

The Department of Energy, now headed by Dikobe Ben Martins, says that if energy companies do not work harder towards meeting the charter’s mandate, they risk losing their licences or having their activities curtailed.

According to the 2002 South African Petroleum Industry Association (SAPIA) report, the industry’s total income tax payment to the state was more than R3-billion.