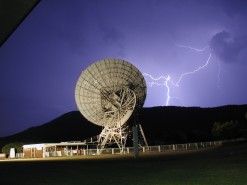 The 26m radio telescope at the
Hartebeesthoek observatory during
a lightning storm.
(Image: Louis Barendse, HartRAO)

Global satellite and cellular data communications company Orbcomm is to build a gateway earth station in Hartebeesthoek, in South Africa.

The company is partnering with South Africa’s Council for Scientific and Industrial Research (CSIR), one of Africa’s leading research and technology institutions, whose Satellite Applications Centre will install and maintain the facility.

Hartebeesthoek, in the Magaliesberg Hills near Krugersdorp, west of Johannesburg, is already a communications hub, with both the Satellite Applications Centre and the Hartebeesthoek Radio Astronomy Observatory located there.

The observatory, which was originally built by Nasa and handed over to the CSIR in 1975, has a 26m radio telescope, one of only a handful in Africa. The other African radio telescopes are also all in South Africa.

It also offers education and science awareness programmes to schools and the public, as well as astronomy-related workshops for teachers, and was the only radio astronomy facility on the African continent until the seven dishes of the KAT-7 array, situated near Carnarvon in the Northern Cape province, became operational in 2010.

The CSIR Satellite Applications Centre provides world-class tracking, telemetry and command services for geosynchronous and polar orbiting spacecraft, and participated in over 50 launch support operations during the second half of the decade. It also acquires satellite data and relays earth observation data.

The centre is to host a Galileo earth station, currently under construction, following selection by the European Space Agency. Galileo is a global navigation satellite system that will provide more accurate measurements than the global positioning system developed by the US. It is expected to be fully operational by 2014.

Orbcomm maintains its own low-earth-orbit satellite network, which provides two-way machine to machine (M2M) communication from anywhere in the world, without the need for access to traditional communications systems.

Modern M2M technology allows wireless and wired systems to communicate, through telemetry, with devices on both large and small scales. The potential applications range from industrial and commercial to personal.

For example, engineers use M2M to communicate directly with Formula One racing cars during a race. Similarly, the engines of modern cars can communicate with the computers of mechanical service providers, who can then fine-tune the running of the car. On a personal level, car owners can buy short-term insurance based on their monthly mileage, which is established with a positioning device fitted to the vehicle.

The Orbcomm network provides near real-time messaging, tracking and monitoring, and the new facility is expected to significantly boost the M2M market in the greater Southern African region.

“Orbcomm provides an ideal solution for many mobile and fixed applications in South Africa and the surrounding areas, many of which are under-served by terrestrial networks,” said the company’s senior vice-president, Christian Allred.

“We believe the M2M market in South Africa will benefit greatly from having the choice and availability to connect to this global satellite network.”

A gateway earth station is the link between the satellite and terrestrial networks, and is responsible for data and voice signal switching between the two.

According to Orbcomm, the local installation will comprise two radomes, or protective weatherproof structures, enclosing VHF tracking antennas and associated controllers, radio equipment and other components. It will also contain an uninterruptible power source and back-up generator.

Construction of the South African facility started in April 2010.

“The station in South Africa is filling one of the last remaining key pieces of geography needed for our extensive coverage,” said Orbcomm CEO Marc Eisenberg. “It also creates an opportunity for new sales channels with local providers.”