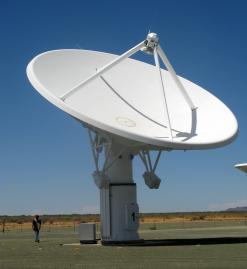 The South African National Space Agency (Sansa) has a New Year resolution: to put the initial stage of the National Space Programme (NSP) into motion.

The process began in November 2010 and the NSP will continue to roll out over a period of between 10 and 20 years.

The NSP is the offspring of the Department of Science and Technology’s (DST) national space strategy and its 10-year innovation plan.

According to Sansa CEO Sandile Malinga, the NSP is important because it will look to position South Africa as one of the leading nations in the innovative utilisation of space science and technology.

“It will help to enhance economic growth and sustainable development and thus improve the quality of life for all,” he added.

Sansa takes the view that a South African space programme will enhance the country’s space capabilities for societal benefit; provide a platform for knowledge creation and utilisation; develop unique technologies and promote innovation; and elevate South Africa’s global standing in the field. The NSP is based upon this view.

Currently, the programme is in the consultative phase, which is led by four groups comprising South African and international experts. Their main focus areas include earth observation, space operations, space science and space engineering.

The four groups have begun setting priority areas and outlining how each can contribute meaningfully to the formulation of the NSP.

NSP project manager Renier Balt said the agency has already consulted with major interested parties and has recently accepted participation from the public.

“We are on a drive to register stakeholders who want to participate via various means,” said Balt.

He said the NSP has established stakeholders’ forums, which have already produced a number of worthy ideas.

Just over 160 parties have registered for the NSP – they include research and development practitioners, government representatives, academics, industry, and the user community.

Some of the more prominent participants include Stellenbosch University’s Prof Herman Steyn, a micro-satellite expert who helped launch the first South African satellite in the 1970s, and Ian Farr who has been involved in space science since the early 1980s.

Tracker, the satellite tracking service usually associated with motor vehicles, is one of the private companies involved in the consultative process.

Balt said that forums are currently held on a face-to-face basis, but added that his team are looking to establish webinars whereby participants will be able to share ideas online.

“Our intention is to be thoroughly consultative,” he said. “Let’s get more people; let’s be challenged by a multiplicity of ideas.”

Balt stressed two aspects that participants should keep in mind when involved in forum discussions; that human capital development is an NSP priority, and that they should only bring ideas that have real impact and real benefits.

To register for NSP participation, visit www.sansa.org.za and sign up on the homepage.

South Africa has long been a standing location controller of satellites and has been involved in many international space launches. In this respect, it has always been a regional power.

However, Balt said South Africa never had a centralised space agency environment and this prevented it from reaching its full potential.

With the NSP, Balt said that Sansa aims to establish a centralised space agency that would transform South Africa into a reliable international player in space business.

Assistance from the government

Balt referred to the DST’s National Space Science and Technology Strategy, saying that its minister Naledi Pandor is focusing on three key priorities – environmental and resource management; health, safety and security; and innovation and economic growth.

Pandor also pointed out four thematic areas within the strategy, one of which is earth observation. This includes the production and launching of satellites. South Africa has already launched the Sunsat and SumbandilaSat satellites, the latter of which had payloads on board.

The other three thematic areas include communication, navigation and space science.

The DST also created a 10-year innovation plan to drive South Africa’s transformation towards a knowledge-based economy, in which the production and dispersing of knowledge will benefit all aspects of human life.

The plan, Balt said, identified a number of grand challenges such as energy security, climate issues, human and social dynamics, and space technology.

The plan states that the social, environmental and economic consequences of climate change are reasons enough to implement technologies to monitor the earth’s system. Space applications, the plan says, is essential in addressing these challenges.

South Africa’s acquisition of a “growing slice of the global satellite industry” is the DST’s core objective if it is to address Pandor’s three key priority areas.