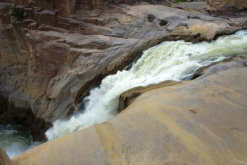 South Africa’s Orange River is the longest
in South Africa, flowing west for some 2 200
km. Along the way it provides hydroelectric
power and water for irrigation.
(Image: MediaClubSouthAfrica.com. For
more free photos, visit the image library). 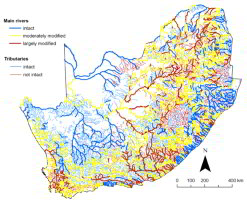 South Africa’s major and minor rivers have
been mapped and priority areas for
conservation  have been identified.
(Image: CSIR)

Protection of South Africa’s renowned freshwater biodiversity has received a boost with the release of groundbreaking scientific data and supporting geo-informatics maps which identify priority areas for conservation.

It is the first time that such a tool – which allows freshwater ecosystem and biodiversity goals to become part of the planning and decision-making processes – is available.

The National Freshwater Ecosystems Priority Areas (NFEPA) project took three years to complete, with the help of more than 100 specialists in the field.

Its aim is to enable better overall and sustainable management of these sensitive, yet economically important areas.

The available information includes spatial maps with data and metadata, an implementation manual and guidelines.

Project co-leader Dr Jeanne Nel, the principal scientist of the biodiversity and ecosystems services at the CSIR, says it should help key decision makers, whose planning will impact on these systems, “to keep these areas in mind when making critical decisions”.

The information is also an invaluable research tool to academics and scientists.

The NFEPA maps and supporting information is freely available online and is expected to be an excellent water management tool. The maps provide guidance on how many and which rivers, wetlands and estuaries should remain in a natural or near natural condition to support the water resource protection goals of the National Water Act of 1998.

Nel says the guidelines do not advise against development, but that they are rather aimed at bringing about development that supports sustainability of the natural environment.

The NFEPA project stresses that the health of ecological systems and associated natural capital should underpin social and economic development.

The study found that only 18% of South Africa’s water supply areas are formally protected.

All inland water bodies, whether fresh or saline, are defined as freshwater systems. This includes rivers, tributaries, lakes, estuaries and wetlands. South Africa’s diverse freshwater ecosystem ranges from sub-tropical areas such as the Greater St Lucia Wetlands Park, to the semi-arid interior, and the temperate rivers running through the Western Cape fynbos region.

The Cape Floral Kingdom is part of this fynbos biome and is so unique in terms of size and number of species found just here, that it was declared a biodiversity hotspot by the UN Environmental Programme, and later received Natural World Heritage Site status.

The NFEPA study divided the country into different ecosystems and produced some surprising findings. For example, it revealed that 30% of South Africa’s smaller rivers remain remarkably healthy.

Nel believes the findings of the completed study will be critical in ensuring that these ecosystems remain in good shape, because they provide “a flushing potential” for larger ecosystems.

She adds: “Our tributaries are in good health and should be seen as critical buffer zones which support the health of our working rivers. They hold great conservation potential.”

But not surprisingly, and matching the global trend, over half of the country’s other freshwater systems are threatened. An alarming 57% of rivers are threatened while the figure for wetlands stands at 65 %.

A concerning statistic is that of South Africa’s coastal estuaries which shows an 82 % decline. As a unique ecosystem on its own, the highveld region in the country’s north-eastern interior was highlighted as one that was particularly threatened.

The study also highlights the importance of conserving the country’s 19 remaining free-flowing rivers.  Free-flowing rivers contain no dams and flow undisturbed from their source to the confluence with a larger river or the sea.

The report notes that these rivers should receive top priority to retain their free-flowing character as this is a rare feature in the South African landscape and should be seen as part of our natural heritage.

Through the Working for Wetlands programme, over 800 of South Africa’s more than 114 000 wetlands have already been rehabilitated since the programme was started 10 years ago.

The national Working for Water programme has been clearing invading alien plants since 1995. The programme grew from 20 projects in 1996 to over 300 projects currently.

The Thicket Restoration programme is restoring degraded thicket at various areas in the Eastern Cape province, including parts of the Baviaanskloof Mega-reserve. Besides providing additional job creation potential to poor communities in the area, it is estimated that the restoration of degraded land can sequester up to 411 tons of carbon dioxide equivalent per hectare.