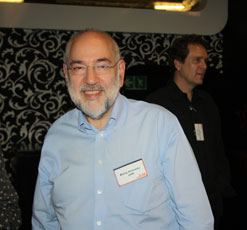 Professor Barry Dwolatzky is excited about the new software hub. He believes our world has changed at the core, with a tsunami of technological, economic and social transformation. 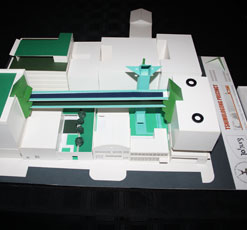 The old nightclub will be remodelled as the iClub, the dance floor will be a co-working space, the bar and seating areas will be set up to encourage innovation through incubating new start-ups, and the sound and light control area will become the server room. 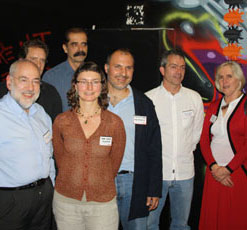 With funky wallpaper, a DJ box, architecturally interesting window frames and a labyrinth of fascinating spaces, a former nightclub at 41 Juta Street in Johannesburg’s Braamfontein is being renovated, to be transformed into the city’s technological hub.

Global tech hubs include Nairobi’s iHub, driving Kenyan innovation, as well as the Googleplex in California and the Cambridge Innovation Centre in Massachusetts, both in the US.

Part of the ambitious the Joburg Centre for Software Engineering (JCSE) cluster development programme, TechinBraam is revitalising the once derelict suburb into a cutting-edge, high-tech precinct.

The programme is a three-way partnership between the government, academia and industry, based at the University of the Witwatersrand.

Professor Barry Dwolatzky, JCSE director, says the university has been trying to reach into its urban surroundings, and this is a perfect opportunity to do so.

“This vision is what a renewed future can be, in the broader urban environment. Through partnering and a creative energy, we want to have as enormous an impact as possible. There are similarities to Maboneng, an artistic, creative hub on the east side of the city centre. Developments like these are a chance to remake this country, remake opportunities, and remake the economy of the area, and the space to remake careers.”

The precinct has been dubbed Tshimologong, meaning “a place of new beginnings” in local language Sesotho.

Dwolatzky outlines how technology has affected society. “It has changed in numerous ways, how we make things (the use of robotics), how we buy things as consumers (online), how we communicate (we are all threaded together by networks of communication), how we deal with knowledge and education, how we deal with health, how we deal with government, and entertainment and leisure.

“Our world has changed at the core, with a tsunami of technological, economic and social transformation.”

He explains that within the three elements of digital technology – software, hardware and content – the innovative lifecycle is no longer linear.

“There is now a connection: skills are no longer static, skills and ideas merge together, there is business model development and finally, commercialisation.

“This new innovation will not take place in garages, or in the offices of big corporations. It will be a social activity, with people working together, people joining together, and this innovation will skyrocket in technology hubs. In these single environments people will be able to germinate ideas, learn, interact and incubate. This set of spaces will encourage innovation, learning and collaboration.

“Almost all cities have hubs, some have more than one; they are popping up constantly.”

Establishing the Tshimologong Precinct is now at a critical stage, with funds being raised to begin Phase 1 of building renovations.

Clare Jeffrey, head of the Wits University Partnerships Office, explains; “Phase 1 will require an investment of about R10-million. We have set up a Founding Partners Pledge scheme, which provides an opportunity for corporates and individuals to support this exciting initiative. Founders will be listed in perpetuity on a board displayed prominently in Founders Square …. Companies pledging R250 000, or individuals and SMMEs pledging R50 000 before 31st December 2013, will be acknowledged in this way. We have already had pledges from Microsoft and BBD, with several others in the pipeline.”

From hubs to clusters

Cluster development was proposed by company strategy authority and Harvard professor, Michael Porter, in the 1990s and refers to a geographic concentration of interconnected businesses. For example, London’s East End is now known as Silicon Roundabout or Tech City. It has 10 technology hubs, more than 5 000 technology companies, and some 300 start-ups per year, and it’s becoming the European Union’s new answer to the US’s Silicon Valley.

Dwolatzky explains that research shows that for a high technology cluster to succeed it must be close to research institutions and technology hubs, close to customers, have sound infrastructure, and offer access to transport and housing. There should also be government support.

He adds that Johannesburg is a major city, the economic hub of Africa. He believes that it is possible for the city to be the continent and country’s Silicon Valley.

“Some initial hubs have started up; Jozi Hub at 44 Stanley, The Open at Maboneng, and Intellilab on the UJ (University of Johannesburg) Kingsway campus. This is not about competition; it’s about joining the dots and making this into something bigger.”

The old nightclub will be remodelled as the iClub, the dance floor will be a co-working space, the bar and seating areas will be set up to encourage innovation through incubating new start-ups, and the sound and light control area will become the server room.

The warehouse, 43 Juta, will be remodelled into classrooms and meeting areas; 47 Juta becomes the development centre, and 45 Juta houses offices. Founders Square, a public space, will sit at the heart of the centre offering a coffee bar and events area.

Finally, Wits will begin to reconnect with its neighbourhood, as some of its ICT-related Centres (such as the JCSE, the LINK Centre and parts of Digital Arts) move off campus into Tshimologong.

Anna Cowen, from architectural consultancy Meshfield, said, “This hub is selling the future. It is a place of experimentation, a place of discovery. We are regenerating the inner buildings and there is huge potential for growth. Environmentally at the hub there will be renewable energy sharing, rain water harvesting, shared parking and waste recycling. This city block is a symbiotic relationship, with shared resources and risks and benefits.

“We need to rapidly innovate to create smart, resilient and equitable cities that are people-centred … to seek for potential solutions that could cycle urban material … by using waste as resources.”

Dwolatzky and Mteto Nyati, Microsoft South Africa managing director are the co-winners of the 2013 IT Personality of the Year award. The winners were announced during the Institute of IT Professionals South Africa President’s Awards ceremony at Montecasino, Johannesburg, on the 7 November.