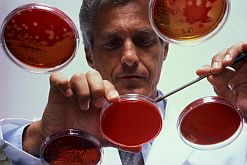 New research by scientists at the Imperial
College London and Harvard University
in the US may be the key to better HIV
treatment.
(Image: www.bioedge.org)

Scientists from Imperial College London in the UK and Harvard University in the US have discovered a key structure of the integrase enzyme found in HIV, and retroviruses opening the door to better treatment of HIV.

The researchers have developed a crystal that could reveal the structure of integrase used by HIV to integrate its genetic material into a host cell. When HIV infects someone, it uses integrase to paste a copy of its genetic information into their DNA.

Prior to the new study, funded by UK’s Medical Research Council and the US National Institutes of Health, many researchers had tried and failed to unravel the three-dimensional structure of integrase, which is bound to viral DNA.

The new study, published in the latest edition of the scientific journal Nature, revealed how a class of life-prolonging antiretroviral drugs – integrase inhibitors – functions. The drugs work by blocking integrase, but for a long time scientists did not understand fully how the medicines managed to do this, or how to improve them.

Researchers can only determine the structure of this kind of molecular machinery by obtaining high quality crystals.

For the new study, researchers grew a crystal using a version of integrase borrowed from a retrovirus called Prototype Foamy Virus (PFV). Based on their knowledge of PFV integrase and its function, they were confident that it was similar to its HIV counterpart.

Over the course of four years, they carried out over 40 000 trials, out of which they were able to grow seven kinds of crystals. Only one of these was of sufficient quality to allow determination of the three-dimension structure.

“It is a truly amazing story. When we started out, we knew that the project was very difficult, and that many tricks had already been tried and given up by others long ago,” said Peter Cherepanov, who led the study at the Department of Medicine at Imperial College.

“Now we have this information, drug developers can modify the available drugs to work better – for instance, to bind tighter to integrase. We will also be able to better understand and explain HIV drug resistance, since we now know how these HIV drugs work,” he said.

Researchers from Africa have also welcomed the discovery as one that might offer great alternatives for patients.

“This is the holy grail of HIV research,” said Dr Matilu Mwau, a virus researcher at the Kenya Medical Research Institute. “It has the potential to increase the repertoire of drugs to treat HIV; it opens a whole new door for manufacturers of HIV medication.”

According to Mwau in the developing world they do not make many different drug combinations for HIV patients. “We treat HIV from a public health perspective, where most people are put on a similar combination. More drugs available mean better chances for people to be put on second- and third-line treatment regimens where first-line drugs don’t work.”

Cherepanov said, “Despite initially painstakingly slow progress and very many failed attempts, we did not give up and our effort was finally rewarded”.