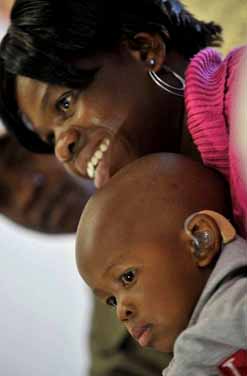 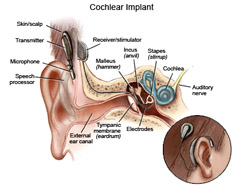 A graphic representation of a cochlear
implant.
(Image: Kids Health)

The cochlear implant programme, established in 2006, is the first of its kind in South Africa. It is run by the Ear, Nose and Throat (ENT) Department and the Department of Speech Therapy and Audiology, in partnership with the Department of Health.

Lavine Mokhojoa, a chef from Soweto, became the first recipient of a cochlear implant at the hospital on 29 September 2006 when he was 45.

To date seven adults and one child have undergone successful cochlear implants through this particular programme.

When the unit opened its doors to the public three years ago, the hospital was optimistic about the far-reaching effects it would have.

“Through the dedication of the highly trained support staff, in both the ENT and Audiology Departments, the selected patients will receive the highest level of post surgical care and speech rehabilitation necessary to make the programme a success,” the hospital stated when announcing the establishment of the unit.

The programme has recently extended its reach by opening a paediatric wing.

On 1 July 2009 the unit performed a cochlear implant on a two-year-old boy, Monthati Makofane.

During such a procedure an electronic device is inserted into the inner ear, which is accessed through a small incision made at the back of the patient’s ear. After the surgery, the wound is given about four weeks to heal.

When the doctors are satisfied the wound has healed sufficiently, the external part of the cochlear implant is fitted. The external apparatus consists of a microphone which picks up sound, a battery which runs the device and a data chip which processes sound.

“As the device was activated, Monthati immediately reacted to the sound by screaming and crying as he heard noises for the first time in his life,” said the hospital’s senior speech therapist, Dani Schlesinger.

Makofane’s parents are ecstatic that their third child is now able to hear.

Abel says he and his wife realised Monthati had a hearing problem when he was six months old.

“Whenever a noise was made, clapping or the TV, he never responded.”

After a battery of tests confirmed that their son was deaf, the Mokofanes were disappointed, but accepted their child’s condition. This was until an audiologist referred them to the Baragwanath unit and Monthati’s life changed forever.

A second child on the list has recently received the go-ahead from the hospital, while two other children have now started the application process to be a part of the programme.

Screening candidates for cochlear implants, Schlesinger explains, is a complex and involved process.

“At first, when we see a patient in the Audiology Department, we start by taking a detailed history of that person’s hearing problems to determine how they came about having a hearing impediment, especially if they used to hear normally before. We investigate how it deteriorated over time and what factors were involved.”

During the screening process potential implant recipients undergo a series of hearing tests. During these tests patients are asked to listen to sounds played at different frequencies to determine the extent of their hearing impediment.

If the tests indicate a severe hearing impediment, patients are fitted with a hearing aid, to see if the device will help them.

Speech and language tests are also conducted to assess how the patient has coped with his or her hearing impediment.

When hearing tests are conducted again and the hearing aid is found to be ineffective, the department considers other options.

“Once the hearing aid is found to be ineffective in enhancing hearing, we then refer the matter to the Ear, Nose and Throat Department, where the state of the cochlear inside the ear is examined.”

“For the patient to be considered for the cochlear implant, there has to be severe to profound permanent hearing loss in both ears, in other words, hearing that cannot be treated,” Schlesinger says.

A team comprising speech therapists, audiologists, an ENT specialist and psychologist then gets together to weigh up their findings on a particular patient. If it’s decided that a cochlear implant may be the best way to assist the patient, the operation is approved.

Once approved, the patient and his or her family are taken to see a psychologist who prepares them for the emotional and somewhat stressful journey ahead.

The patient’s family is required to attend weekly consultations with doctors and therapists in preparation for the operation.

A more detailed examination of the inner ear, detecting where the damage lies, and more speech therapy takes place before the procedure.

After the implant operation, for the next six months, the patient is required to go for regular check-ups at the hospital.

During the check-up sessions the patient will receive auditory training – this includes coaching on how to identify sounds and programming the device to the patient’s hearing level.

At the moment the hospital has a long list of patients awaiting cochlear implants.

Agnes Sekete, 23, suffered severe hearing loss in her Grade 12 year after developing meningitis. But her story has a happy ending – she’s one of Baragwanath’s cochlear implant recipients.

After her device was switched on in September 2008, she said she felt like a completely new person.

Before the operation Sekete said she “was almost knocked down by a car because I did not hear the driver hooting behind me”.

After recovering from the operation, Sekete was granted special permission by the Education Department to write her Grade 12 exams.

She is now waiting for her final results before applying to tertiary institutions to continue with her studies.

“My life was saved by a passer-by who pulled me away from the street. Now I’m able to hear sounds, listen to radio and TV and even answer my cellphone,” she says.

A cochlear implant differs significantly from a hearing aid.

While hearing aids amplify sound, cochlear implants bypass the damaged areas of the ear and stimulate the nerves in the auditory region.

A person with a cochlear implant hears sounds differently to a person with normal hearing, but both are able to recognise warning signals and understand everyday noises like music, animal and car sounds.

While hearing is not restored to its natural state after a cochlear implant, the recipient will have the ability to interact with others and have a conversation like a person with regular hearing.

South Africa has a thriving deaf community that’s committed to uplifting and empowering those with hearing difficulties.

Some 47 deaf schools across the country provide for the needs of 7 000 hearing-impaired children.

Organisations like NIDSA aim to help develop the full potential of deaf people through avenues such as basic education, training, welfare services and spiritual care.

One of the unique features of the institute is that it dispels myths that many people with regular hearing have about the deaf community.

For example, one myth is that sign language is universal.

South Africa’s sign language differs from that in America and other countries. Each country develops it’s own, unique form of sign language.

Just like any other language, sign language also has dialects. In South Africa, there are many different sign language dialects, but the various groups of deaf people, do not, in general, experience problems in understanding the different dialects, according to the NIDSA website.

Another myth is that deaf drivers are more prone to car accidents. The NIDSA says this is definitely not the case, citing increased awareness and a greater reliability on site, making deaf drivers more attentive.

Deaf TV, a channel on Digital Satellite Television, caters specifically for the deaf community in South Africa, and offers lively programmes, including movies and lifestyle features.

Deaf TV presenters and actors all use sign language but sub-titles are also provided for those who are not deaf, and wish to follow the programmes.

Schlesinger says that people who cope with communicating in sign language should carry on with it, as it is an effective way to converse with other deaf people.

“If [a deaf person] is leading a normal life, a cochlear implant would not necessarily be the best route for them, as they are already equipped with an effective communication tool. This operation is not a replacement for sign language, but is there to simply help patients where other interventions have failed.”