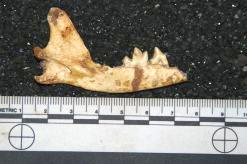 The specimen found at Malapa consisted of what looked like a piece of jawbone and parts of the skeleton. The researchers had to analyse the fox closely to distinguish it from any living or extinct form of fox, based on the proportions of its teeth and other aspects of its anatomy.
(Image: Wits University) 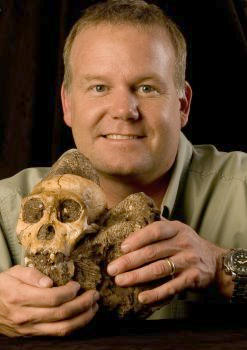 The Malapa cave is one of the richest archaeological sites on the continent, and is best known as the resting place of skeletons of a new species of human ancestor known as Australopithecus sediba, found here in 2008 by Prof Lee Berger.
(Image: Institute for Human Evolution)

The Malapa cave is one of the richest archaeological sites on the continent, and is best known as the resting place of skeletons of a new species of human ancestor known as Australopithecus sediba, found here in 2008.

The Malapa fox is the second new species, after sediba, to be described from this site.

Prof Lee Berger, a palaeoanthropologist from the Institute for Human Evolution (IHE) and School of GeoSciences at Wits University, says the discovery is important for South Africa, and the world.

“Malapa continues to reveal this extraordinary record of past life,” Berger says.

“We find fossils all the time, many of animals that are extinct now but did live at one time. Prior to this discovery, the world didn’t know that this fox existed.”

Researchers from Wits and Johannesburg universities and international scientists published the findings in an article in the Transactions of the Royal Society of South Africa on 16 January 2013.

Berger says when the fossil was discovered, carnivore specialists realised it was something that they had never seen before in science.

The specimen they found at Malapa consisted of what looked like a piece of jawbone and parts of the skeleton – but the only way to prove it is an entirely new fox was through intensive research.

The researchers had to analyse the fox closely to distinguish it from any living or extinct form of fox, based on the proportions of its teeth and other aspects of its anatomy.

They named the previously unknown species Vulpes skinneri, in honour of the late world renowned South African mammalogist and ecologist, Prof John Skinner of the University of Pretoria.

Berger says the discovery can help scientists answer important evolutionary questions about modern African mammals, but it also reveals more unanswered questions about the origins of small carnivores such as foxes.

“It can tell us more about the evolution of modern foxes and gives us insight into the ecology and world of our ancestors,” he says.

“Now there is a whole new lineage of foxes out there that scientists can research,” he says.

Small carnivores often had much smaller and more localised habitats than larger mammals, and this is very useful to scientists. Berger says it could potentially help researchers learn more about the environment at the time.

Mystery surrounds the ancestry of foxes

The IHE’s Dr Brian Kuhn, head of carnivore studies at Malapa, says very little is known about the ancestry of foxes in comparison with other African carnivores such as larger dogs of the Canis group.

Berger explains that so little is known about foxes because specialists studying small carnivores are very rare. “It is not a field of study often taken up by scientists,” he says.

Researchers also tend to focus on the study of “prestige animals” such as large mammals.

And this is why the world’s newest fox is such an extraordinary discovery – it will inspire scientists to work on lesser known species and discover similar animals.

Berger expects that many scientists are going to re-examine their existing fossil collections. If they take a closer look at what they have, they could perhaps uncover another new animal species.

“I think we are going to see an explosion of interest in these small and very important mammals,” he says.

“Who knows what we will find next?”