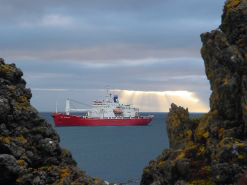 The South African Department of Environmental Affairs and Finnish shipbuilder STX Finland Oy have signed R1.3-billion (US$171-million) agreement to build a new Antarctic supply and research ship for the country.

The department signed and announced the deal on 17 November at the V&A Waterfront in Cape Town, in the Western Cape province.

The currently unnamed vessel will replace the 31-year-old SA Agulhas, which will retire in 2012.

According to the department, the new vessel will be “one of a kind” designed to carry cargo, passengers, helicopters and fuel; while serving as a research base for the three South African stations on Marion Island, Gough Island and Antarctica.

The three stations fall under the South African National Antarctic Programme (Sanap) which government has set up to carry out research in the area. They are managed by the Department of Environmental Affairs’ Antarctic and Islands directorate.

“The new vessel is vital for South Africa to maintain its strategic presence in the Southern Ocean and Antarctica,” the department’s research chief, Dr Johan Augustyn, said at the announcement.

“We are looking at our future role in researching climate change in the Southern and Indian oceans. We wanted a ship with more laboratories that can accommodate other branches of science. We are hoping to do marine biology research with the new vessel,” he said.

The new vessel will enable scientists to lower sophisticated probes into the depths of the ocean to measure water temperature, depth, oxygen, light and the presence of phytoplankton. The equipment stores data so that it can be compared over a number of years, giving insight into temperature changes driven by climate change.

Scientists aboard the new vessel will also be able to assess changes in the distribution of certain ocean plants and animals that depend on a particular temperature range for survival. A proliferation of tropical species and a decline of cold water ones could be an indication of global warming.

Satellites and ocean buoys can collect similar data, but the advantage of a research vessel is that it is very flexible – it can move scientists around with ease, enabling them to use a far wider range of sensors and techniques.

The new, 134m-long vessel will be built at the Rauma shipyard in Finland. Rauma director Timo Suistio said the design and engineering will start immediately and construction will begin in September 2010. “The ship will be delivered to the South African Department of Environmental Affairs in spring 2012,” he said.

Suistio said it was the company’s first ship-building project for a South African client and part of its long-term strategy to break into the African market. “Our aim is to make this vessel an example of our ability and use it as a reference for future jobs,” he said.

Augustyn said the new vessel will be able to break through thicker ice at higher speeds than South Africa’s current research ship. “It will be a more effective tool and not cost much more to maintain than the SA Agulhas, as it has three times as much power and is more fuel-efficient,” he said.

The icebreaker will have shelter and a landing area for two Puma class helicopters, a gym, a library and a small hospital. It will accommodate 45 crew members and 100 passengers or researchers.

The SA Agulhas currently carries cargo and passengers to the island of Tristan da Cunha in the south Atlantic Ocean around September each year. The ship drops off the tourists and then moves on to Gough island to deliver cargo and exchange research staff, giving the public an opportunity stay on Tristan for up to three weeks. It is expected that the new ship will offer a similar service.

Equipped with 800 square metres of research space, the vessel will act as a mobile laboratory for scientists and be able to collect weather data for meteorological institutions around the world.

It is hoped that the top-class facilities will attract foreign experts and help South Africa rebuild its deep sea research capacity, which has dwindled over the years due to a lack of infrastructure and shortage of scientists. Many have left to work overseas or moved into the private sector.

“The new ship, apart from its supply function, will be a catalyst to rebuild the deep-sea oceanography capacity in South Africa,” said Henry Valentine, Antarctica and Islands director for the department.

“This will also attract participation of international scientists and researchers, thus significantly contributing to research projects addressing new challenges and changing interests [such as climate change],” he said.

Allocating this level of funding for the new vessel, despite current pressures, reflects the South African government’s commitment to the Sanap, said Valentine.