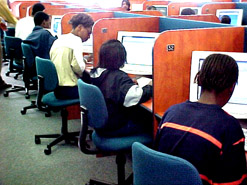 Computer users from across Africa will
now enjoy the experience in their local
languages thanks to the initiative of ANloc.
(Image: digitaldividend.org)

The start of the project will coincide with the celebration of International Mother Language Day on 21 February, which aims to raise awareness of the importance of continuing to use vernacular languages.

The initiative will see the number of locales available for African languages increased over the next 12 months.

A locale is a master file that can be used across all the computer’s applications to help it adapt to the local language and country.

Data include language information, such as how to express dates, and Unicode font support, as well as country information such as currency names and symbols.

When a locale is implemented properly, a computer will be able to have features including search options and spell checking.

According to the African Network for Localisation (ANloc), only 36 of Africa’s approximately 2 000 languages have their own locale. The organisation’s goals are to create another 100 by the end of this year.

The work of ANloc, which is a pan-African network, is rooted in eliminating technological barriers that prevent computers from being used by mother tongue speakers.

Three criteria will be used by ANloc to identify languages to be targeted for localisation.

Firstly the language has to be one of the official languages of a particular country; secondly, it must be spoken by at least 500 000 people; and thirdly, there have to be linguistic resources or volunteers available to facilitate the process of localisation.

So far, about 200 African languages have been identified which meet at least one of the criteria set above.

Celebrating the diversity of languages

At this conference, a language policy for the world was adopted for all member states of the United Nations. Member states were asked to:

The event has been observed every year since February 2000 to promote the uniqueness of the different languages.

Almost 6 000 languages will be celebrated on International Mother Language Day.

Among the objectives of this day, as set out by Unesco, is raising awareness of languages that are under threat. According to recent estimates from studies conducted into languages, half of today’s languages have fewer than 10 000 speakers and a quarter have fewer than 1 000.

Koichiro Matsuura, Unesco’s Director-General, says it is imperative to raise the issue of multilingualism around the world. “Languages are at the heart of humanity’s intangible heritage. They are born, they evolve and, sometimes, they are doomed to die.

“Yet, it behoves us to do all in our power to safeguard them so as to preserve the world’s invaluable cultural diversity.”

Unesco has taken it upon itself to drive the issue of language preservation.

The organisation believes that all initiatives to promote the dissemination of mother tongues will serve not only to encourage linguistic diversity and multilingual education, but will also build understanding, tolerance and dialogue.

Unesco also believes that it is essential to ensure that marginalised languages continue in use, alongside the major international languages of communication.

As the bid to have the most popular African languages available for users online continues, so does the number of users from the African continue to grow.

According to IT news website itnewsafrica, as of December 2008, Internet usage in South Africa has hit an all-time high.

The website says according to a study titled “Internet Access in South Africa 2008”, internet users have increased to 4,4 million in a country of more than 40 million people.

“The increase comes on the eve of the biggest shake-up in South African Internet access we’ve seen since the dawn of the commercial Internet in 1994. It is only the beginning of a dramatic turnaround, and is occurring despite numerous obstacles in the way of growth,” researcher Arthur Goldstuck told the website.