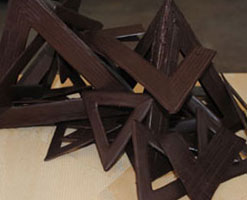 “Maslow Reconstructed” by Orijin. The designer explains: “The Mayans were known for their triangular temples and chocolate. ‘Maslow Reconstructed’ breaks down the concept of hierarchy so that the triangles coincide and exist where there is no structure, reminding us that our greatest need lies in redefining our histories and who we are.”
(Image: Melissa Jane Cook)

“The coming together of two very different worlds – chocolate and technology – inspired the idea of creating chocolate artwork made possible through the use of innovative technology,” said Kevin Corlett, business executive manager for chocolates at Nestlé.

All designs had to be created on the Android operating system using freely available 3D modelling tools. The designs were then printed out in chocolate by Hans Fouche of Fouche Chocolates, using a RepRap 3D printer, a free-standing desktop printer capable of printing its own plastic parts, to easily and cheaply replicate the machine. Fouche used to design Formula One cars, and now sells 3D-printed chocolates and cake décor from his Centurion-based business.

Speaking to the htxt.africa website, Fouche said printing the sculptures was painstaking work. “For many of the complex designs, I had to print two layers at a time and then physically stick the sculptures together, otherwise they would have collapsed under their own weight during construction.”

KitKat, or Android 4.4, is available for download onto some Android devices and Google’s flagship Nexus 5. The phone and operating system aim to display Google’s search and voice-recognition capabilities.

A Google statement on the Android website says: “Android is the operating system that powers over one billion smartphones and tablets. Since these devices make our lives so sweet, each Android version is named after a dessert: Cupcake, Donut, Eclair, Froyo, Gingerbread, Honeycomb, Ice Cream Sandwich, and Jelly Bean. As everyone finds chocolate so tempting, we decided to name the next version of Android after one of our favourite chocolate treats, the KitKat®!”