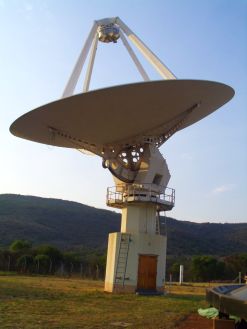 South Africa’s space science is improving
steadily, and the country is one of two
finalists – with Australia – to host the
proposed Square Kilometre Array.
(Image: Janine Erasmus)

South Africa has played a part in one of the most significant space exploration events to take place this year – the Nasa launch of the latest rover heading to planet Mars.

On 26 November, Nasa successfully launched the Curiosity rover and the South African National Space Agency (Sansa) was selected to track and observe the vehicle when it entered South African skies.

Just an hour after the launch, the Curiosity was above South Africa as planned.

The space shuttle was located over the horizon using Sansa’s S-Band antenna. Strydom said the event was captured with a radio telescope and the live video images were sent back to Nasa’s headquarters.

The facility, located next to the HartRAO radio astronomy observatory at Hartebeesthoek, 40 kilometres north-west of Johannesburg, tracked the space vehicle for five minutes.

Sansa was chosen to track the shuttle and monitor the separation because South Africa was ideally placed to witness it.

The rover is set to perform the first ever precision landing on Mars at the Gale Crater any time between 6 and 20 August next year.

Sansa’s CEO Dr Sandile Malinga said that South Africa’s involvement in the launch is evidence that space, science, engineering and technology can unite nations on Earth.

According to Strydom, Sansa’s contribution to the launch is more than just about South Africa’s unique location. “Sansa Space Operations has built a strong reputation and offers services that are comparable to that of most developed space nations,” he said.

“It is a privilege to be a part of this space mission and this gives testament to the technological expertise that is available in South Africa to support such large scale investments,” said Strydom.

This is the second time Sansa has supported Nasa this year. In June 2011 the TT&C team provided support for the launch of Nasa’s Aquarius instrument, which produces images of the salinity of Earth’s ocean surface.

Since January this year, Sansa has supported launches and transfer orbits for 17 international space missions.

The agency will be involved in another space mission this festive season. They will assist in the launch of a European spacecraft. However, Strydom kept mum about the details.

Curiosity’s mission is to see if any life form had previously existed on Mars and to assess if the planet can support microbial life. The rover will be deployed on the surface and will analyse soil it collects and powders it drills from rocks.

Curiosity follows in the footsteps of two earlier Nasa rovers that have landed on the red planet; Spirit and Opportunity.

The Curiosity, however, is five times larger and can carry ten times the mass of the previous rovers. It can also cover a greater range. It is expected to operate for one Martian year, which is equivalent to 668 Martian days and 686 Earth days.

The Curiosity got its name from a sixth-grade pupil named Clara Ma from Kansas City who had suggested the name in an essay contest run by Nasa.

The Mars Science Laboratory Curiosity mission is part of Nasa’s Mars Exploration Program. It is managed by the California Institute of Technology’s Jet Propulsion Laboratory. The project cost around US$2.3-billion (R19.5-billion).